If you could get more value for less money, why wouldn’t you do so?

What you want out of your internet service provider (ISP) will be specific to you: if you’ve had a lot of tech trouble in the past and need great customer service, maybe you’re willing to pay a little more for it.

Or, if you’re looking for just a few megabytes of speed, why would you pay more to get extra you don’t need? An ISP with many plan sizes that include slower speeds can help you save money.

And if you have a vendetta against cable providers, what DSL provider is going to give you the most megabytes for the cheapest price?

Since comparing internet service providers on these things is time-consuming and an often frustrating endeavor, we did the work for you. Speed and price are directly related, so we chose the ones that had the best ratio between the two.

But not only did we look at cheapest overall prices, since price isn’t always enough of a factor, we broke things down into categories and focused on finding the cheapest provider for various needs.

So without further ado, here are the top 7 cheapest ISPs for their value.

AT&T Internet offers plans with speeds as low as 5Mbps – perfect if you don’t use the internet for much and don’t need much. For $10 bucks more a month, you can get speeds between 10 and 100Mbps.

But you can get low-speed options for better rates with Frontier internet, which we’ll talk about later.

No, AT&T is priced great if you need affordable DSL, but most importantly – great customer service. Both the American Customer Satisfaction Index and the South and North Central regions of the J.D. Power rankings support this.

The only other ISP to beat them in customer service is Verizon Fios - and we’re not going to count them here for 2 reasons:

But on the downside, AT&T could come out to be pricier than even their stellar customer service is worth. With their 2nd-tier plan, you’ll get whatever speeds are available for your location – which could mean as low as 10Mbps just as easily as it could be 75 or 100Mbps.

And if you only need a few megabytes of speed, there are cheaper options available from other providers.

Bundling is great with AT&T – although you only save $10 dollars per month, you can nab one of the best TV providers around: DIRECTV.

*With autopay, plus taxes, equipment charges, and other fees.

And even at the 300/300 level, you still get a better price than Xfinity’s closest equivalent, which has 50 fewer megabytes; or Cox’s Internet Ultimate, which asks $20 more per month for the same speeds — and neither of those are pure fiber-optic like Verizon, either.

And the Gigabit connection is still competitively priced with others, too – only AT&T beats them, and by just $10/month.

Plus, the latest report from the Federal Communications Commission (FCC) found that Verizon easily exceeds advertised speeds for users.  In addition, if you sign up for an internet-only plan, you won’t be locked into any contracts.

With all that said, why didn’t we make Verizon #1 overall for cheapest?

Verizon is available in just 9 states on the eastern seaboard as of writing – so for most people it’s not even an option.

Verizon offers some great bundles, too. For instance, if you grab Fios alongside a cell phone from Verizon, and you’ll save $20 bucks a month. And as of writing, if you order online you get your $99 installation fee waived.

Most Speed for the Money - Xfinity

*Prices per month plus taxes for length of contract. Additional fees and terms may apply.

While Verizon Fios may have east-coasters zipping along on their plans, they don’t actually offer the fastest top-speed in the country – nor are they as available for the price.

That honor falls on Xfinity: With a top-tier plan reaching 2Gbps (2000Mbps), they have the fastest speeds available in the United States. Plus, since they’re available in 38 states, you can get 150Mbps for just $5 bucks more than Fios’s 100Mbps plan, and for cheaper than Frontier or Cox’s nearest equivalents.

And if you don’t need that much speed, Xfinity’s starting plan gives you 25Mbps for just $29.99 a month. That’s $5 bucks cheaper than Frontier and more than double the speed of Cox for the same cost.

But while Xfinity offers a no-contract option, taking advantage of it will mean you’re prices jack up by $10 a month – and that can make all the difference. To get the advertised prices, you’ll have to lock into a contract for at least 12 months, after which the prices will climb.

Plus, like AT&T, Xfinity’s plans – and the prices – vary pretty widely across the country. My former editor saw prices that were $5-$10 more per month for the same speeds, for instance.

Xfinity gives you massive discounts (think $60 a month!) when you bundle services with them – the best around. Double, Triple, and even Quad are the options – and the more you bundle, the more you save.

With Frontier internet, you get a serious variety of plan options. Don’t need much for speed? Grab the 6Mbps plan for just $20 a month. Find yourself needing a little more? Just jump up to the 12 or 18Mbps tiers. No other ISP here gives you so many low-speed options.

Even as you progress through the tiers, you’ll find most plans are comparably-priced to competitors like AT&T and Xfinity. There was really only one notable plan by Xfinity that provides slightly faster speeds than Frontier – Xfinity’s Performance Starter (25Mbps) for $29.99 a month, compared to Frontier’s Simply Broadband (18Mbps) for $30 month.

However, if available to you, Frontier offers the Vantage Simply Elite: 25Mbps for $30 a month, making that a fairly moot point for some.

Frontier also offers a wide range of fiber-optic plans, but they cost more per month than any of the other providers listed here, so we’re not going to discuss them much.

Most Value for the Money - CenturyLink

*Price includes paperless billing and excludes taxes. Rate without is $5-$10 more per month.

Initially, the price-per-megabyte asked by CenturyLink is higher than competitors like AT&T and Frontier’s DSL plans. But CenturyLink is super available (39 states) and offers a Price for Life Guarantee that we think boosts their value tremendously over time.

Depending on your area, whichever DSL plan you choose might qualify for this guarantee – which means that whatever price you sign up for is the one you’ll have literally forever.

We mean it, too – so long as you stick with CenturyLink, your monthly rate will never rise, no matter how many years it’s been since you signed up.

So while AT&T and Frontier and all the rest of the other providers on this list are jacking rates up year after year – you’ll be riding steady with CenturyLink.

In addition, unlike AT&T, CenturyLink doesn’t do contracts. Nor, while reporting a 1TB data limit, does CenturyLink actually throttle or charge you extra for going over – their doesn’t seem to be any recriminations for it.

And even CenturyLink’s Gigabit plan is competitively priced when compared to AT&T’s Internet 1000 or Verizon’s Gigabit Connection.

Unfortunately, however, CenturyLink falls a bit short on actually delivering its advertised speeds, according to the FCC. 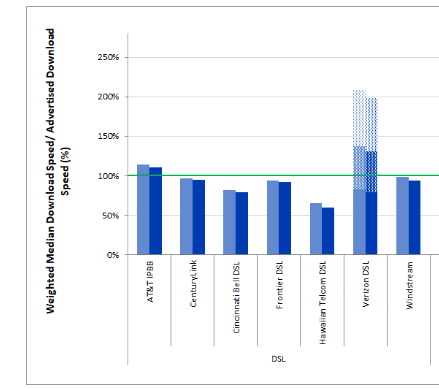 At least Frontier is in a similar boat, but AT&T knocks both of them out of the water in providing its subscribers with the speeds they’re paying for.

Another downside for CenturyLink is their customer service – they fall far short according to the ACSI, taking 7th place with 59 points – and the average score is 62.

*For the first 12 months, with 1-year service agreement.

Price-per-megabyte, Cox’s plans are fairly mediocre. For example, you’ll get just 10Mbps for $29.99 a month, while Xfinity offers 25Mbps for the same price; as does Frontier.

But, working hard in Cox’s favor, you get the cheapest installation options for any of these providers: $75 for the professional job, and just $20 to do it yourself. For reference, here’s what the installation costs are for other providers:

Customer service isn’t too bad, either, with J.D. Power giving them 5 power circles in that category in the South – 2 circles more than Xfinity.

So in terms of a low-price cable provider for a bare-bones speed offering and cheap install, Cox’s Internet Starter 10 isn’t a bad option – though we’d still go with Xfinity if available and just eat the installation costs.

**Starting price for the first 12 months, effective 07/16/19. All offers and availability vary by location and are subject to change.

Typically you’d want your internet service provider to say yes to you – but Spectrum doesn’t do that. While the price for 100Mbps speeds is middling – AT&T offers $50 a month, Xfinity 150Mbps for $44.99 – Spectrum has no contracts, no data caps, and no router/modem fees.

So you can skip out any time you want, you don’t have to worry about overage charges, and you can save about $10-$15 a month in equipment rental fees.

However, Spectrum also only advertises the 1 plan, but offerings actually vary from 30Mbps all the way up to 400Mbps for the same price. So you could wind up getting a poor deal (30 or 60Mbps, rather than 100Mbps) - or you could get a great deal (200Mbps or 400Mbps). You’ll just have to type your info in to see.

Unfortunately, the higher top speeds (400 and 940Mbps, respectively) are not widespread at present. That said, most people will see the 100 and 200Mbps plans available to them, and the FCC reports that most subscribers will get the speeds advertised to them.

That was a lot – here’s the recap:

How to get Cheap internet

Most people will fall into 1 of 2 categories – just starting with a new provider, or wrangling a cheaper rate from your current provider. We explore both here.

From a new provider

To start with, identify what providers are available in your region. Most people won’t have many to choose from. Satellite internet is available in nearly every state, with DSL coming in as the next most-available technology.

Cable comes 3rd in availability, with fiber-optic in last place. Try inputting your address here to find ISPs near you.

Once you know your options, you can investigate their plans. To do that, you need to know how much speed you’re going to need. We’ve used this table in other reviews, and it’s a great reference:

Finally, compare your options. When you do so, compare a few things:

In addition, you may qualify for a subsidy – a discount on internet service. Check out EveryoneOn, a nonprofit organization that asks a few questions, then pairs you with cheap internet services in your area.

From your current provider

So your promo has come to an end – that’s it, right? Not so fast. You can negotiate your bill. First, do your research. A few things to check:

Once you’ve got all that covered, you’re ready to call. Ask for a customer retention specialist and stay firm. If your speeds are slow, discuss them. If you can get a better offer from a competing provider, bring it up.

And if nothing works – walk away and go with someone better for you.