We like Viasat’s fast speeds as a satellite ISP, but many people don’t care for their vague pricing. Yet is it really ‘vague?’ Let’s find out.

When you’re checking out satellite internet, you won’t find many service providers available to you. That’s annoying, especially since you probably don’t have any cable or DSL options available to you either – but unfortunately it’s par for the course.

We’ve already reviewed HughesNet here, but it’s Viasat Internet that we suggest for most people living outside the reach of DSL, cable, and fiber-optic internet coverage.

Formerly known as Exede (formerly WildBlue), Viasat launched a second satellite into orbit in 2018, allowing them to boost their internet speeds up to 100Mbps — comparable with DSL speeds. And with a wide variety of plans and speed options, Viasat is a formidable ISP – and sometimes the only option.

* Prices and plans vary with location.

** Up to speeds listed. Actual speeds may vary.

As a satellite ISP, Viasat is able to provide service just about everywhere, but that availability comes at cost. Viasat boasts some of the most expensive plans for the megabits they offer - considerably more so than DSL or cable plans.

But when you live out of the reach of DSL or cable internet options, they are definitely the better of the 2 satellite providers for both cost and speed.

In comparison to HughesNet, Viasat plans – have a better dollar-for-Mbps ration: in most cases, you’ll get more speed for the same or less. For example, one of Viasat’s 25Mbps plans are the same cost as either of HughesNet’s 20 or 30GB plans — and with a much larger data threshold.

That said, we’ve got a big gripe about Viasat’s plans and pricing, which we’ve talked about in our “Best Satellite ISPs” comparison review: Viasat’s transparency sucks, plain and simple.

Depending on where you’re located in the U.S., you’ll get a different selection of plans and prices. This can actually be a good thing – for example, when I input my zip code, not only did I see Unlimited Silver 25, but I was also offered the “Liberty” plans, which I hadn’t seen before.

That was a whole new set of unadvertised plans to check out – nice. 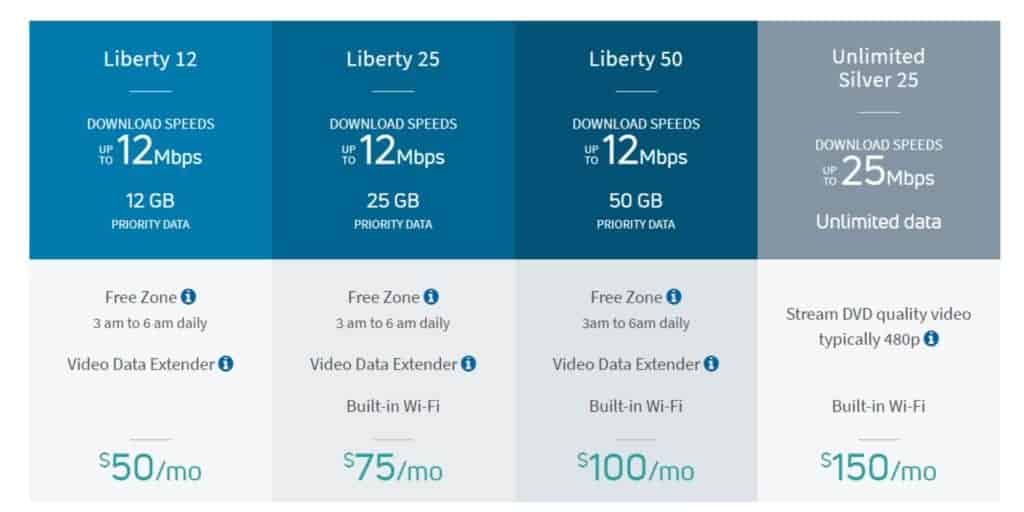 And while I was under the impression that Viasat doesn’t do discounts anymore, my editor was offer a myriad of them when he typed in his own zip code – so you might be too, which is great news if you’re looking to save some cash.

Lastly, we had to trawl through Viasat’s website repeatedly just to find some of their plans.

So basically, before signing up, use Viasat’s availability checker to see if the plans in your region will be faster than HughesNet’s offerings – that’ll make sure you pay the right price for the fastest speeds you need.

We got a little off track there with my rant, so I apologize. We mentioned higher data limits than HughesNet helping to make Viasat the better-priced internet option at times. Well, while HughesNet’s plans are structured around the amount of high-speed internet data you get before being throttled (10GB, 20GB, 30GB, etc), Viasat offers much higher data usage options before you’re speeds are slowed down - and there are no overage fees if you do.

For example, the Unlimited Bronze 12 starts you at a 40GB data threshold. If it’s your area, the highest-tier Unlimited Platinum 100 gives you 150GB of priority data before throttling starts – and there’s the option to upgrade to an unlimited plan, too.

And even if you only have the less-advertised Liberty plan options like I got, which had as low as 12GB of data, you also get “Free Zones.” Every customer gets a 5-hour window of time where you can use unlimited data without having it count toward your data allotment for the month.

The exact hours vary, but typically fall between midnight and 8am. For instance, my free zone would be between 3am and 6am every single day. This period of time is simply a low data usage time when few people are using the internet bandwidth.

The Free Zone is a great chunk of time to take advantage of downloading large files, like games, video, or updates.

Viasat also offers a no-contract option if you want to skip a two-year contract — but there’s a kicker: it’ll cost you $300 to opt out. Ouch. If you think you’ll stick with Viasat for at least 2 years – go with the contract.

Of course, if you decide to go with the contract, but change your mind later and want to cancel, you’ll face early termination fees (ETF) of up to $300. The good news is it’s prorated and just $15 for every month remaining, so it’s cheaper than sticking it out.

As you might have noticed above, Viasat has a 3-month price jump: you start out at a great price, then it leaps up. The thing is, you wouldn’t know it: they advertise a two-year contract pricelock, but they’re sneaky – that pricelock doesn’t take effect until after the 3-month jump.

That said, price-to-Mbps still comes out better with Viasat than HughesNet in most cases.

That said, price-to-Mbps still comes out better with Viasat than HughesNet in most cases.

* Up to speeds listed. Actual speeds may vary.

As we already mentioned earlier, Viasat launched a 2nd satellite (Viasat-2) into orbit in 2018. This allows them to provide never-before-seen-from-satellite internet speeds of up to 100Mbps -- 4 times HughesNet’s highest speed of 25Mbps.

As we already mentioned earlier, Viasat launched a 2nd satellite (Viasat-2) into orbit in 2018. This allows them to provide never-before-seen-from-satellite internet speeds of up to 100Mbps — 4 times HughesNet’s highest speed of 25Mbps.

Although it should be said: Viasat offers higher middle- and top-range speeds than direct competitor HughesNet, but if you can’t get those speeds in your area, you might actually be better off going with HughesNet. You’ll simply have to see what’s in your area – and test whether you’re actually getting those speeds.

Latency - a problem with satellite internet

With all this talk about speed, we’d be remiss if we didn’t mention a key limiter to satellite internet speeds: latency. What’s that, you ask?

Latency, also known as ping, in simple terms is the time it takes for your internet data to travel to and from point A to point B. With satellite internet, there are a lot of stops in between: your device, your dish, to the orbiting satellite, to a stationary dish on the ground… so it’s more like point A to Point B to Point C to Point D… and back.

That’s the primary reason satellite internet offers such slow speeds: so far, there’s only so much they can do about latency. But tech is advancing, and I’m sure we’ll see faster and faster speeds soon.

In the meantime, live-action video games aren’t going to work that well with a satellite internet connection. But if all you like to do is browse the web or stream some music or Netflix – Viasat’s speeds will be plenty in most cases.

We mentioned monthly data caps already in the “Overages” section, but they bear mentioning again. Viasat advertised their data as being unlimited – and that’s true. But, high-speed data is not. You get a certain amount of data per billing cycle. Beyond that, especially during network congestion, you’ll get slowed down. For reference, by each plan’s price range:

Those are actually pretty good - aside from higher data speeds, you tend to get a higher threshold with Viasat than with HughesNet. For example, Viasat’s Unlimited Bronze 25 gives you 35GB of data for $50, then $70 a month at 25Mbps download speeds. HughesNet’s closest plan gives you 30GB of data per month for $100 a month. That’s a huge difference.

Installing these pieces of equipment is typically done by a pro. They come to your home, mount the dish, orient it to face the southern sky – with specific coordinates to zero in on the orbiting satellite – and then wire the dish into your home.

You can learn more about how satellite internet works here.

ISPs, like the rest of the telecommunications industry, are highly-complained about. In this age, no one wants to be without internet. Viasat is no exception.

But if you need to contact customer or tech support, they’re support page is pretty clear and easy to navigate. They also have chat and phone support (855-272-7232).

Since they launched their second satellite, Viasat has become the fastest of the two satellite internet service providers available. Although more expensive than DSL or cable, when you live in a rural area, you don’t have any other options if you want internet access.

So with typically higher speeds for the money (depending on your specific region), Viasat tends to be the better of the two satellite options available. Test Viasat, compare it to HughesNet for your area, and see for yourself.

Can you game with Viasat?

Yes and no. Because of the long latency, satellite internet in general -- both Viasat and HughesNet -- will not work well for live-action multiplayer games like Call of Duty or most online MMORPGs.

For other games, however, it can work just fine — just remember that if you’re downloading a game, take advantage of the Free Zone so you don’t use up all your data.

Where is Viasat available?

Viasat is available in 49 states, with Alaska being the only one missing. You’re most likely to find the fastest speeds in California, Texas, and New York. 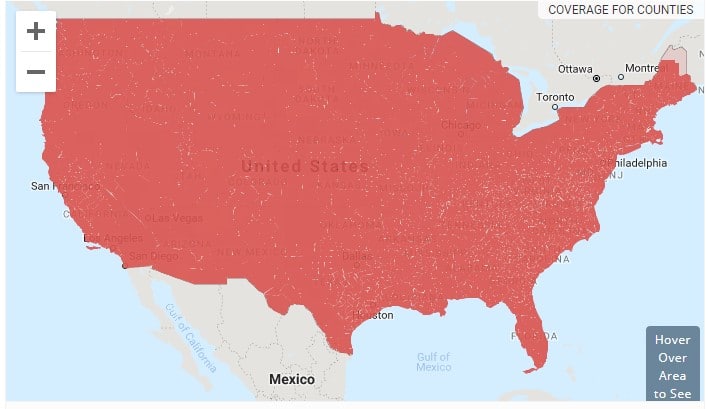 Can you stream Netflix with Viasat?

Yes. The minimum recommended download speed for streaming according to Netflix itself is 1.5Mbps; Viasat runs at 3Mbps, which is enough for SD quality. Hulu has similar recommendations.

Gaming is a little bit tougher, though, as Viasat’s Mbps upload speeds are not as high and latency is too high.

Is Viasat better than HughesNet?

We covered this more widely in our head-to-head review on the best satellite internet providers, but we’ll touch briefly on the competition here. HughesNet is the only other one, and their big advantage over Viasat is as a budget provider with straightforward pricing.

While Viasat’s plans and prices vary, and they have that 3-month rate hike, HughesNet stays rock-steady: all 4 of their plans offer the same speed (25Mbps) and are available across their coverage area for the same prices, no matter where you are.

Before Viasat launched their new satellite, HughesNet was the dominant force — but since then, the latter has struggled to match Viasat’s relatively blazing speeds and higher data thresholds. Although tending to be a lower cost overall, HughesNet still loses the dollar-to-Mbps game to Viasat, too.

That said, HughesNet has a higher base-speed than Viasat, so in some areas, despite Viasat’s higher top-end potential, you may get faster actual speeds with HughesNet.

Does Viasat run any bundles or deals?

Yes. You can bundle any Viasat internet plan with DIRECTV and save $120 annually. Depending on the plans in your area, you may be eligible for monthly discounts, as well.