We like Republic Wireless’s cheap, straightforward plans, but if you use a lot of data, it’ll get more expensive than it’s worth.

Republic Wireless began offering cheap cell phone service in 2011 – and since they were competing against many other affordable MVNOs, they had to come up with a creative way to stand out.

Their answer: Wi-Fi calling – and they were providing it well before Google’s Project Fi came onto the scene.

Since 2011, Republic Wireless has overhauled their tech and service plans, fixing the bugginess of their original offerings and making them a service to be reckoned with - but are they right for you?

How does Republic Wireless work?

As mentioned, Republic Wireless decided to try something that, at the time, was very novel: using Wi-Fi calling alongside regular cellular networks to provide cheap cell phone service. But how does that work, and how does it save you money?

Since you’re connected to Wi-Fi, too, you don’t use any data for online activities, either - so you save that way, too.

Then when you get out of range of Wi-Fi, your Republic Wireless phone will switch to a traditional network (Sprint or T-Mobile), so you’re able to continue your service uninterrupted. When you do that, you’ll start using your data allowance.

***Prices don’t include taxes and other fees.

When it comes to Republic Wireless’s plans, they keep it ridiculously simple — there’s just one: the My Choice plan. That gives Republic Wireless a distinct advantage in an often-ambiguous industry: straightforwardness. You get one plan, which has unlimited talk and text included — other discount carriers, like FreedomPop, limit you here.

The customization for Republic Wireless comes in choosing the amount of data you want: you’ll pay $5 extra for every 1GB of data you add per month. So you start at a base monthly rate of $15, then just tack on $5 for every gig you use, up to 15GB. Google Fi charges $10 bucks a gig, so not bad, huh?

Going with 3GB of data will run you $30, which is better than MetroPCS’s 2GB plan (also for $30); although it needs to be said: Metro’s plans include taxes, while none of Republic’s advertised prices do. You’ll have to add that on.

But, the data can add up — a 15GB plan will cost you $90 a month. For the bare-bones features included, with no perks, that’s frankly ridiculous — plus, any unused data doesn’t rollover. StraightTalk’s 25GB plan is just $45 a month with the same unlimited talk and text, and Simple Mobile gives you 10GB for $40 per month, plus international features.

Save some money - go into your Republic Wireless phone’s settings and turn “Ask me to join Wi-Fi networks” on. You’ll then get a notification when your phone is in range of any open WiFi connections.

But, pay ahead for data - get a discount

As you’ll have noticed, Republic Wireless also offers an annual option for payment, which they rolled out in May 2019. By doing it this way, you’ll save about 16.67% than by paying each month individually. The only caveat is it’s available to members only — so you’ll have to pay for your first month like normal, but after that, you can sign up for the annual payment option.

The annual option really only makes the most sense if you have a good idea of how much data you use each month. For example, if you know that you reliably use 3GB of data each month, you can sign up for the yearly payment plan with it setup on a 3GB data allotment.

The kicker is, if you don’t use all your plan’s data, you’re throwing away money; likewise, if you consistently need more than your data allotment, you’ll pay the regular $5 per extra GB that you add on, and may wind up paying more than the monthly option. And, while you can add extra data, you can’t downgrade your “base plan” during the 12-month period.

Plus, you need to pay for your year’s service up front. So while you may get a discount, it may also be a major headache if you’re not very confident (and accurate) in your estimate of your data usage.

Unlike major carriers and some other MVNOs (like Simple Mobile), Republic Wireless does not offer any international service. But that doesn’t mean you can't use your Republic Wireless phone overseas -- you can still take advantage of the Wi-Fi calling that’s built in to call and text U.S. and Canadian numbers. 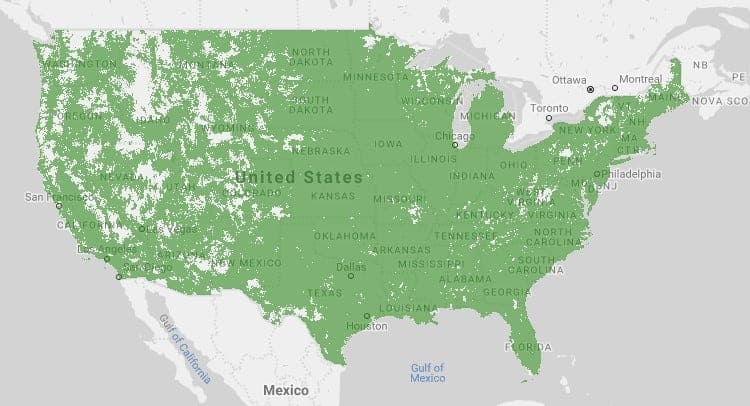 As we talked about earlier, Republic Wireless is able to keep their monthly costs low by utilizing both Wi-Fi and traditional cellular networks. If you disconnect from Wi-Fi, your Republic Wireless phone will connect to a cell network to maintain your service. As such, they offer pretty decent network coverage.

It’s important to understand that this can be difficult — even with regular cell service, you can experience dropped calls when switching between different cellular towers. Although Republic Wireless has claimed “seamless switching” since the start, they did have issues with the Wi-Fi/cell tower switch in their first years.

They’ve since updated the firmware involved in this, which has vastly improved the switch, and continue to provide updates to make the switch more seamless.

But what cell network does Republic Wireless use?

The bottom line: you’ll be covered most places by either Wi-Fi, Sprint, or T-Mobile’s networks.

As an MVNO, they actually lease space on a major carrier’s networks — 2, in fact: Sprint and T-Mobile. OpenSignal ranked T-Mobile a close second for fastest network, and the Uncarrier takes 3rd place for coverage behind Verizon and AT&T. Sprint takes last place in all categories.

So the bottom line on Republic Wireless’s performance is this: you’ll be covered most places by either Wi-Fi or T-Mobile, or Sprint’s networks. But, since neither of those carriers has the best rural coverage, expect to hit dead zones if you get too far off the beaten track.

That said, check out Republic Wireless’s availability checker before you hop on their plans – you’ll only be able to use one of the two carrier’s networks, not both. You’ll most likely have better service if you live in an area where T-Mobile’s network is strong for you. 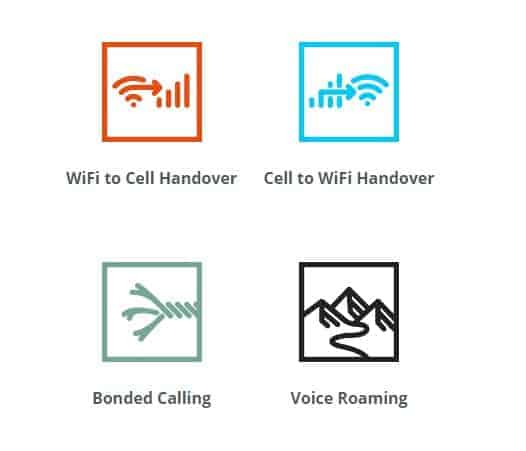 We’re going to beat a dead horse here a little and talk some more about the blended Wi-Fi/traditional cell service. Alongside routing your calls and texts through Wi-Fi whenever possible, Republic Wireless has a name for this and more features: adaptive coverage.

What’s that? Well, it’s just a fancy name for the “suite of patented features” that helps improve your call experience. That includes the tech that allows you to switch from Wi-Fi service to cell service mid-call without interruption; the reverse (cell to Wi-Fi); as well as “Bonded calling” and “Voice Roaming.”

Bonded calling is pretty cool — if you’re in an area where your Wi-Fi signal isn’t providing you with the best quality call, your phone will sense it and automatically “backfill” the gaps with available cell data to improve it — and at no cost to your data limit.

Voice roaming jumps in when you’re out of Wi-Fi or Sprint/T-Mobile’s networks. You can still make calls on a variety of partner networks without extra cost.

If your Wi-Fi isn’t working well, you can easily switch back and forth from it to cellular data. Just hop on the Republic Wireless app and you can enable Manual Handover.

If you decide to buy a phone with Republic Wireless, you’ll get a decent selection of Android phones – Motorola G7s, some of the latest Samsung Galaxies, etc. A limited, but not-bad selection.

But you’ll notice there’s a gaping hole in the lineup: any iPhones, or Apple operating system phones in general. That’s a big downfall of Republic Wireless – they don’t have any. Most other MVNO’s, like Simple Mobile or Total Wireless, at least offer older models of the Apple flagship devices.

If you want to save money, you can bring your own phone with relative ease. There are a few requirements, though: it has to be a GSM-compatible phone (no CDMA here, sorry), it needs to be compatible with Republic Wireless’s firmware, and you need to buy a ($5) SIM card.

The table above offers a complete list of phones that are currently compatible.

And another note - you can’t bring your own iPhone, either - they don’t work with Republic Wireless. Period.

There are plenty of good customer reviews for Republic Wireless, but not much actually said about the carrier’s customer support. That’s not necessarily a bad thing – few negative reviews. One thing that definitely stood out to us, though? A lot of the answers on official forums come from other customers.

That’s a pretty cool thing that Republic Wireless encourages (“Ask an Expert Member”), but is less-helpful when you need an answer to a billing question. Luckily, though, the support center is pretty well set up to answer that sort of thing.

One thing you’ll notice, though, is that they don’t have a phone number to call. This is intentional. According to their website, Republic Wireless “[doesn’t] believe in sitting on hold listening to cheesy elevator music and corny advertisements.”

As the carrier offers plenty of how-to guides, Q&A posts, community, and chat options, we’re not too bummed — although sometimes it can be nice to speak to a human being over the phone when you’re stuck.

Republic Wireless offers customers a pretty great way to save some money — if you aren’t a huge data user. After buying your phone, you’ll still likely save hundreds over the course of a year. As for coverage, they’ve got you pretty well covered between Wi-Fi calling and Sprint or T-Mobile — yes, rural coverage may not be as good, but if you’re a city or suburb-dweller this likely won’t be a problem.

Our biggest complaints about Republic Wireless is the lack of an unlimited data plan, which means relatively-higher data users will be better off with another MVNO like Simple Mobile. And, if you’re an iPhone user, you don’t get any options – you’ll have to pass.

Overall, if you don’t use much in data, you can save a lot of money for decent service with Republic Wireless.

Can I use a CDMA phone with Republic Wireless?

No. You can only use a phone that runs on GSM with Republic Wireless. This is because the networks that the carrier uses are Sprint and T-Mobile, which only run GSM.

Can I unlock my Republic Wireless phone?

If you have a Republic Wireless 3.0 phone (their latest update), there’s no need – it’s already unlocked – all the phones they carry are. If you have a 1.0 or 2.0 phone (specifically, Moto E 1st and 2nd gen.; Moto G 1st and 3rd gen.; and Moto X 1st and 2nd gen), you cannot unlock them due to the unique software.

You can find out more here.

Does Republic Wireless have stores?

No, all sales are online.

Does Republic Wireless have any deals or guarantees?

Yes. Republic Wireless offers a 14-day money back guarantee. The only rules are that you must contact the carrier within 14 days of delivery of your phone, and return the phone undamaged with all of the original packaging. They’ll send you a free shipping label, so just load everything up and send it back.

Republic Wireless also has a deal going on right now – when you activate a new line of service and port your number over, you’ll get 2 months of service completely free. Just do so before June 30, 2019 at 11:59 ET.

They’re also clearing out some pre-owned phones, as well as offering a free Google Home when you buy an LG K30 at full price.