AT&T and Comcast are two of the biggest Internet Service Providers (ISP) in the U.S. Comcast Xfinity — the brand name of the overarching company — is the biggest cable ISP within the country; while AT&T is the largest overall telecommunications company in the entire world.

It doesn’t matter who you are or what your specific needs are — if you’re looking for a new ISP, you’ve probably come across one of both of these companies’ names in your Google search.

Both ISPs have good points and bad; and since they’re so large, both may be available in your region. That said, the question becomes: Is Comcast Xfinity or AT&T right for you? What are those good and bad things? How are they different from each other?

To start with, the first difference between Comcast Xfinity and AT&T internet is the technology they use to transmit their internet signals to and from users.

Comcast use cable to provide users with internet. Most of the time, this means using what’s known as “fiber to the node,” or FTTN. This means that fiber-optic cables are run to your neighborhood, then when they reach your neighborhood, switch over to pre-existing copper coaxial cables — the ones that have been there for decades.

With this method, speeds usually reach much higher than 150Mbps — and with Comcast, as high as 2,000Mbps. The problem is that once the signal reaches the neighborhood, your bandwidth will be shared by all your neighbors who also use cable internet.

So if Joe Schmoe next door is a videostreaming fanatic, he could be eating up your bandwidth. Even if none of your neighbors are extreme users, you’ll still find that your speed slows down during “peak hours” — usually in the afternoon and evening when everyone is home from work and school.

The other downside is that cable has a bit more limited availability, as the signal deteriorates over great distances.

AT&T internet uses DSL and fiber to deliver their internet. For most people, DSL is the only option, but it’s pretty widespread. DSL delivers your internet by copper telephone wires, rather than underground cables.

AT&T actually used updated tech called “Very high speed Digital Subscriber Line,” or VDSL, which gives (you guessed it) faster speeds than ordinary DSL. But that said, speeds are slower than cable in most cases: usually about 75Mbps — half of what cable is capable of at a minimum.

The upside is that all internet connections are direct to your home — not your neighborhood — so you don’t share bandwidth. That means, while slower overall, your speeds will be more consistent. DSL also tends to be more affordable.

When it comes to AT&T’s fiber-optic internet, it’s a little more limited. In some cities, Fiber-to-the-home (FTTH) is becoming reality, with speeds reaching 500-1000Mbps. That said, not all of the fiber connections are pure — due to deteriorating copper cables, AT&T has been merging fiber with them to create a hybrid copper-fiber network of sorts.

At first glance, it looks like AT&T would have better variety for speeds on the lower end of things, starting out at 5Mbps — and you’d be partially right. DSL speeds start at 5Mbps. They also have a plan that gets up to 100Mbps — and those speeds will vary from 5, 10, 25, 50, 75 or 100Mbps. The speed you get is just based off what is available in your area.

Meanwhile, Comcast Xfinity starts you off with a little higher base speed of 25Mbps. And according to the FCC, you’ll get the speed advertised when you subscribe. Ookla’s speedtest.net found the same, with 84.5% of speed samples taken from across the country meeting or exceeding that minimum 25Mbps threshold.

In terms of plain numbers, that same study gave Xfinity a speed score of 104.67. In contrast, AT&T Internet received a score of 76.0.

If speed is all you care about – go with Comcast Xfinity.

AT&T and Comcast’s monthly prices are in line with the rest of the industry. They’re solid prices, for decent value. The big thing to remember is that for both ISPs, the prices advertised are only for the first 12 months — after that, they’ll go up, usually by at least $10 a month.

Comparing apples-to-apples, AT&T’s 100Mbps plans come in at $50 a month — for both DSL and fiber. Comcast’s most comparable plan is the 150Mbps Performance Pro, which clocks in at $44.99 a month — $5 bucks cheaper for 50Mbps more in speed. Despite some of the bandwidth-sharing disadvantages of cable, Comcast is the better choice here — you’re more likely to reach advertised speed, and even if your neighbors slow you down, you’ve got a 50Mbps buffer — and for $5 cheaper per month.

In terms of higher speed options, AT&T’s fiber Internet 1000 costs the same as Comcast’s hybrid coaxial-fiber offering of the same speeds. But, the kicker is that Xfinity has a huge $1,000 upfront fee for that plan — AT&T makes you pay just $99.99 upfront. Ouch for Comcast.

Both AT&T and Comcast have 1TB (1000GB/month) data caps on their lower-tier plans, after which your speeds will slow down — or in Comcast’s case, you’ll gain a 50GB “block” of data for a $10 charge. Go with any of AT&T’s fiber options, you start out cap-free, which is nice

1TB is a massive data cap, but if it’s not enough for you, both have options to upgrade to unlimited.

Both providers offer double and triple play bundling options — i.e. internet, landline phone, and TV service. But when it comes to this category, AT&T is hard to beat. DIRECTV is one of the best TV services around, so if you’re a TV lover — especially sports fanatic — than AT&T is the winner.

But that said, if internet is more important to you, Xfinity costs a bit more but offsets that by providing faster speeds. If you live in a city or suburb, you’ll probably get twice the speeds with Comcast as you would with AT&T.

We’ll call it a tie here. 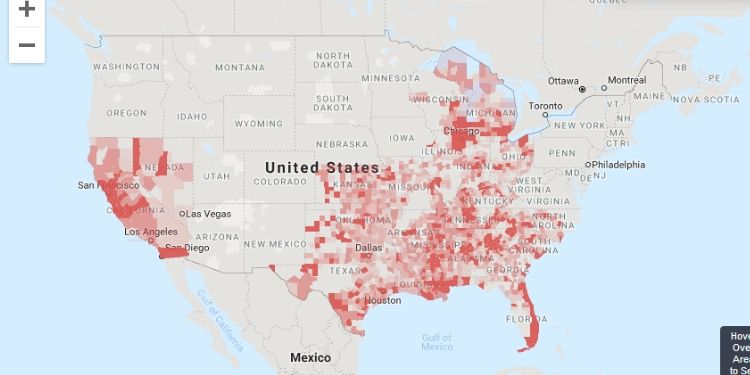 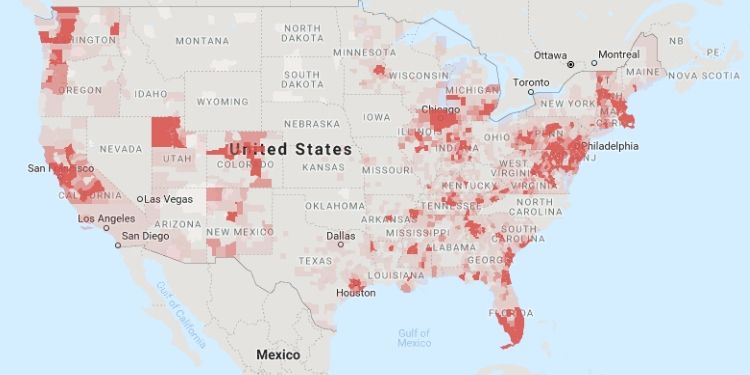 Both AT&T and Comcast are pretty widespread — in fact, AT&T is the largest DSL provider in the U.S., and as already alluded to, Comcast Xfinity is the largest cable internet provider, too. But even so, neither is available in every state. They actually cover some very different regions.

As you can see by looking at the AT&T coverage map, AT&T internet is primarily available in the midwest and southern parts of the country, while Comcast’s coverage area is more widely distributed.

In terms of number of states, Comcast is in 39 overall, and AT&T is in just 22. So the chances are greater that you’ll find Comcast in your area, although there’s considerable overlap in the midwest. Otherwise, Comcast is in many places where AT&T is not, and conversely.

That said, large swathes of the country are left uncovered by either provider, and even in regions highlighted in red, you may find areas that aren’t covered.

In any case, it’s a hard choice as to who’s the winner: Comcast is in more states overall, but the states in which AT&T is available have greater coverage than some of Comcast’s additional states.

We’re going to call it a tie: if one is available in your area, then the choice is clear; if both are available, then use other criteria to make your choice.

As always in this industry, reviews from customers are mixed — and there’s always room for plenty of improvement when it comes to ISP customer service. When comparing the issues most complained about, the two providers become pretty compatible:

When it came to the east region, AT&T wasn’t in play and Comcast took 2nd place there, as well, with 3 power circles; neither AT&T nor Xfinity placed very high in the west.

Although you’ll need to take these with a grain of salt, we’re going to give AT&T the category based on these studies.

Internet installation shouldn’t have a huge effect on your choice in internet; but, it can certainly come into play if everything else comes out equally, as it can come with some major extra costs. AT&T charges $99 for a professional installation, or $35 for the DIY option. Xfinity is a bit more nuanced: installation can cost anywhere from $60 to $500, and for their 2000Mbps plan, $1,000 to install.

If you want to buy and use your own router, Xfinity is the more clear option. They have a webpage that clearly outlines recommended and compatible router, modems, gateway brands and models with a variety of price ranges.

The faster the speed of your chosen plan, the more Comcast’s installation costs will hurt.

So after all that, who’s the best of the 2 internet providers?