We like the variety and improved speeds of Cox Internet, but we’re not sold on the prices.

Like Cox Communications’ TV service – Contour TV – the cable telecommunications company seems happy to be average for their internet service. Prices are higher than competitors, and speeds good-to-mediocre.

But that said, Cox’s actual internet speeds – compared to those they advertise – have actually improved dramatically, making them more competitive with Xfinity and Spectrum. But while speed have gotten better, pricing has not; although they might be more fair now that you’ll actually get the speeds you expect.

But, if the other cable Internet Service Providers (ISPs) are unavailable in your area or just not cutting it for you, maybe Cox Internet will be. So - let’s check out what we found about Cox’s internet packages.

*For the first 12 months, with 1-year service agreement.

To start with, you get 5 plans to choose from – but it’s worth noting that the prices you get (alongside actual speed) will vary depending on your location. But location-based price changes from ISPs are expected and common – it’s just an unfortunate fact. So we appreciate those who keep things as straightforward as possible.

That aside, the prices in the table above are those we received when we went to their “Shop Internet” webpage. But while we’re not going to take away points from Cox for following the industry’s practices, the rest of the prices aren’t favorable to the provider.

For example, Comcast Xfinity’s cheapest plan, the Performance Starter gives you 15Mbps starting speeds (or 25, depending on location) – for the same price as Cox’s Internet Starter 10, which gives just 10Mbps of speed. And in actuality, Xfinity’s Performance Starter starts out as cheap as $19.99 a month if you live in the right area and go with the 15Mbps option.

So already, Cox isn’t doing great. And it’s not just Cox’s cheapest plan that doesn’t stack up well against competitors: Xfinity’s Performance Pro gives 150Mbps download speeds for $15 bucks cheaper per month than Cox’s Preferred 150. You can also get up to 400Mbps speed for $5 cheaper with Xfinity.

But on the plus side for Cox, they have more options than the other big cable competitor, Spectrum internet. Spectrum advertises just 1 plan – 100Mbps (although, if you check out our review of them, you’ll find you may have access to speeds up to 400Mbps for the same prices – again, depending on your region). Spectrum’s comparison isn’t quite as cut-and-dried, but in most cases, for price-per-megabit, you’ll still wind up better off with Spectrum.

Some good news on the pricing front: Cox let’s you skip the contract if you’d like to. The catch – you’ll pay more: $15 extra a month for the Starter, $16 extra per month for Essential, and $14 more per month for Preferred. The rest also have considerable price hikes.

So, in the short term - i.e. the first 12 months - signing that contract can be beneficial. Good news is that it’s only that long: 12 months. Sign that agreement and you’ll get the advertised price. Bad news is, of course, that you’ll get charged early termination fees (ETFs) if you cancel before the end of the contract’s term.

Tried Cox Internet and don’t care for it? You can cancel within the first 30 days without any ETFs.

The last thing to note here is that after those first 12 months are up, the price is going to increase those non-contract rates. Ouch. But you might be able to negotiate if you call – it’s worked with other providers before.

For additional fees, you’ll have to contend with data overage fees if you go over your limit: $10 bucks for every 50GB beyond – we’ll talk about that limit more soon. There’s also installation fees – while they will vary in exactness by region, you can self-install for about $20, or have the pros do it for $75. You can also sign up for the Cox Service Protection plan, which runs $6.99 a month and gives you access to repair specialists and wiring consultants. Yay.

The plan prices advertised also do not include taxes or surcharges, which will vary by area.

There are also equipment charges to take notice of. Cox advertises reliable Wi-Fi to every corner of your house – but you’ll need to pay extra for it. This is the $10 a month router fee for their Panoramic Wi-Fi Mesh system.

Plus, if the installing tech identifies that you’ll need an extra boost to have full coverage, they’ll recommend extenders to do so - for an extra $4 a month per extender.

If you live in a smaller home or apartment, you’ll probably be fine with just a regular old router, but if you have bigger home – you might need the extenders, adding an extra cost to worry about.

In the past, Cox Internet has gotten poor scores from the Federal Communications Commission’s (FCC) fixed-broadband reports, with actual speeds reached by customers falling short of advertised speeds.

In fact, those reports showed most customers received just 75% of advertised speeds – as in, someone paying for 10Mbps would receive 7.5Mbps. Or, customers paying for 150Mbps would receive just 112.5MBps. While the FCC uses something they call “80/80 speed” to make their determinations (80% of users experience this 80% of the time) and some users could have been receiving better speeds, that’s still significant.

Lucky for Cox, the latest report from Dec 2018 shows dramatic improvement: 80% of users are now receiving greater than 100% of advertised speeds 80% of the time. You can find Cox’s bars right in the middle of the “Cable” section.

While certainly not providing the very best of speeds according to this data, Cox is far-and-away doing much better at actually delivering speeds promised, even during peak usage times. They even match up pretty well against Spectrum and Xfinity, coming up a little shorter during peak times alone.

So bottom line – odds are that you’ll get the speed advertised for your area most of the time.

We promised to talk more about data caps, so here we go. Like most ISPs, Cox provides a generous data cap of 1TB – 1,024GB – per month. For most people, that’ll be plenty. 1TB is equivalent to streaming a lot (read: hundreds) of HD video – basically making it your job for 8 hours of every day to game, stream, browse, and post on social media while doing so. So if you’re a typical internet user, you’ll be fine.

But if you’re a super-user – a gamer, video- or music-streaming fanatic, P2P sharer, or just have a lot of internet-loving roommates – it might not be enough. And if you pass that limit, you’ll get dinged: $10 per 50GB.

If you want to avoid this, there are a few options:

It all comes down to what your monthly usage is on a consistent basis.

It’s worth spending some time discussing internet types. Cox provides cable internet – your data travels along underground copper coaxial cables to your neighborhood, where it then splits off to each household that has the service.

This “splitting off” means that when a lot of customers with the same cable internet are online at the same time (peak hours), you’re sharing bandwidth, and everyone’s speed is going to suffer.

But, cable typically has higher top-end speeds than DSL internet. DSL operates by using your existing telephone lines. It’s separate – and better – than dial-up because it uses a different frequency for travel. While more available than cable and without the problem of sharing bandwidth – alongside being cheaper – DSL doesn’t have as high of top-end speed.

Lastly, fiber optic is slowly gaining ground in the U.S. Rather than using electricity to travel – like cable – it uses light bounced through pieces of plastic and glass, allowing for higher download and upload speeds than cable can produce. But, it requires laying an entirely new set of cables underground, so it is expensive and less available. 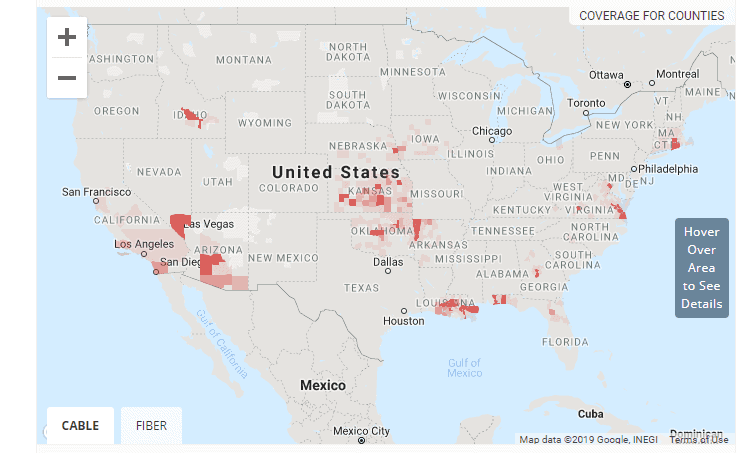 Cox provides internet service to 18 states. Compared that to Xfinity, with its 41 states of service coverage, or Spectrum with 43. However, in some cases – like Arizona, Nebrasak, and Kansas, Cox offers better service than the others.

No ISP gets fantastic ratings from customers for support services. So with that said, we’re going to look at J.D. Power and the America Customer Satisfaction Index (ACSI) to make our determination.

The latest J.D. Power Residential Internet Service Provider Satisfaction Study found Cox lacking in many areas - but customer service, surprisingly wasn’t one of them. In the South region, Cox had the most power circles - 5/5 - of any of the ISPs. In the East region, they took second to Verizon Fios (5/5), with 4 power circles, which tied them with Optimum.

When it comes to internet speeds, we’d probably go with Cox Internet rather than DSL options like AT&T or CenturyLink – although AT&T’s much better customer service and wider availability (21 states) gives us pause there.

But, Cox doesn’t quite measure up to the other 2 big cable ISPs: Comcast’s Xfinity and Time Warner Cable’s Spectrum Internet. While you’ll most likely get the speeds you pay for with either of the 3 cable providers, you’ll get the megabits for cheaper with Xfinity or Spectrum – and they’re more likely to be in your area.

But, if you can’t get Spectrum or Xfinity, then give Cox Internet a go - just watch out for that 1-year agreement and its ETFs and drastic price jump afterward.

Does Cox Internet run any deals?

Yes. The primary “deal” is the one we outlined above – the promo for your first year of service that takes about ⅓ off your monthly price. But alongside that, there are a few others:

How fast does my internet need to be?

How fast your internet should be depends on how many people are the internet and what you’re all using it for. With Cox’s speed tiers, here’s a set of “rule of thumb” guidelines to help you:

You can also check Cox’s Speed Advisor tool to find out more.

What states is Cox Internet available in?

Cox is available in 18 states:

What is Panoramic Wi-Fi?

Panoramic Wi-Fi is Cox’s version of something called “mesh Wi-Fi.” Mesh Wi-Fi uses a series of connected devices to increase internet coverage for an area, rather than just relying on one router. It’s best for homes and businesses that are large enough where a single router just doesn’t cut it.