We like TracFone’s low prices, but, since this is a prepaid carrier, it is best for people who don’t use their phone very often.

In the not-so-distant past, carrying a cell phone was a luxury. For many, the costs associated with doing so was too much for them to bother– they already had their landline after all!– then TracFone showed up on the scene.

TracFone carved out a new industry-within-an-industry: cell phone plans that were prepaid, so you only had to pay for what you used. Now, TracFone is one of the largest cell phone carriers– coming in just behind Verizon, T-Mobile, AT&T, and Sprint— of course, this make them the largest prepaid carrier.

TracFone is even big enough to own several other Mobile Virtual Network Operators of their own — some of which you may have heard:

That’s not even all of them, either. Anyhow, TracFone focuses on consumers who are just light-to-moderate phone users; most often, these customers land in the 55+ age range. We’re not being ageist here– it’s just a fact. Take a quick look at their website and you’ll see plenty of images of people in that age range, as well as deals that appeal toward that market.

Since TracFone was established in 1996 (under a different name), yet are still around and relevant, then they must be doing something right. But how good are they really? We dug in to find out, and now it’s your turn.

TracFone has no contracts; only plans split between “Smartphone Only” and “Basic phone”. They only offer no-contract, prepaid plans that range between 30, 60, 90, and even 365-day increments. So, say you buy one of the year-long plans, that will last you the entire year… or until you use all of your minutes. It will also carryover so long as you buy a new plan before your current one’s time period runs out.

One look at their website, and it can get overwhelming. To make it easier to understand, we split up the details of their plans in the next sections.

But, if you’re square in TracFone’s target group– i.e. you don’t use your phone for much except texting and calling when you’re running errands– then these plans just might be perfectly-priced. Many competitors simply can’t beat these prices– not Cricket, Verizon prepaid, or MetroPCS. The only one who offers a similar plan is FreedomPop’s free plan (it’s free until you use a certain amount of data), which lasts just 1 year before leaping up.

Where the TracFone’s basic plans fail is that they don’t offer unlimited talk and text, like those same competitors listed above– there’s a limit. Of course, that’s kind of the whole hook of the brand, so I guess you have to take the good with the bad.

TracFone’s smartphone-only plans start a little higher, at $15 a month. Once again, however, TracFone doesn’t offer unlimited talk and text– and the max offering is 1,500 minutes and texts each, meant to last 365 days.

But they do come with between 500MB and 2 GB of data which is just enough for the casual user to run a Google search every now and then; so long as you don’t who don’t stream Netflix or play games on your phone, you should be fine.

If you do plan on streaming with your phone, then TracFone’s plans aren’t your best bet– the best data option is still $50 for just 2GB. While that might be a 90-day plan, if you are streaming a lot, then there is no way you will be able to stay under that 2GB threshold. In short, you’d be better off going with either MetroPCS or Cricket Wireless:

The difference between those is network coverage: MetroPCS uses T-Mobile (perfect for metro areas), and Cricket uses AT&T (more widespread reliability). If you’re interested in TracFone’s coverage, you should check out our section on that below. It is surprisingly complicated.

These prices come out about right when compared to competitors, and they’re pretty fair when compared to regular service plans – riding the line of fair, while still giving incentive to bump up to the next tier if you consistently use more data than your plan allots you.

When you setup your account with TracFone, you’ll be given the option to sign up for the auto-refill. Essentially, if you go over your plan’s allotment of talk, text, or data before your next cycle, TracFone will refill everything for you. Doing so gives you a small monthly discount.

There are some trade-offs to this either way. For instance, if you’re on a budget, an auto-refill could be a precarious thing that sends you into the red. Moreover, you don’t always get to choose the plan that might fit your current needs the best; maybe you just wanted to buy a $10 500 minute add-on and didn’t want more texts.

TracFone does its best to continue to save you money: they don’t offer the latest smartphones.

The good news? That means that they’re cheaper phones… although those same phones are available elsewhere alongside the newer, more expensive phones.

The bad news? Planned obsolescence is a real problem in the modern smartphone landscape. Investing in a phone that’s been on the market for two or three years means it won’t support updates within a few more years; you’re effectively shrinking what is already a stunningly small viability window.

But if you want to bring your phone over, no problem: TracFone has a BYOP program that supports both GSM and CDMA phones. Just make sure you use their compatibility checker to double-check first. 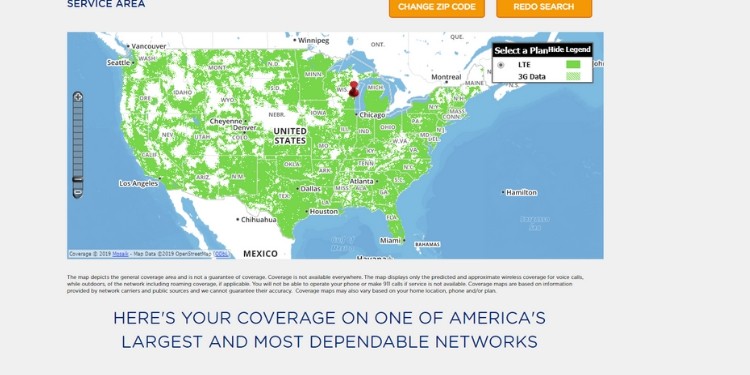 TracFone has a leg up over a lot of other MVNOs: most just use one or two, but TracFone uses 5. That means you should have coverage just about everywhere, because you have your pick of the networks.

But, since TracFone will probably just pick one for you, you may not have great service. For instance, in the TracFone coverage map above, there are considerable white patches (no service) throughout the west and midwest regions of the country.

So unless you’re lucky enough to be placed on Verizon’s network, chances are high that your connection in rural areas will suffer.

Add onto that the fact that, as an MVNO, TracFone is essentially “leasing” space on the networks’ towers, so you will always be deprioritized first in favor the direct customers of whichever major carrier (Verizon, T-Moble, etc.) is facing congestion. That’s not specific to TracFone, though– it’s the price you pay for the cheaper prices of budget carriers.

Unfortunately, this can be expected – the telecommunications industry as a whole has a poor reputation for customer service. But if you do need to contact TracFone for help, you can check out a variety of options from chat, Facebook, and Twitter to forums and over the phone. You can hop over to their Customer Support page to find those links.

TracFone Wireless recap -- how good are they?

TracFone’s many plans can be overwhelming, but it’s good to have options. Being able to pay for 90 and even 365 days at a whack is a nice option to save some dough and being locked in for the period.

But if you need more than 2GB of data or an unlimited plan – go with someone else. We have a great list of the best prepaid cell phone carriers you can check out for a starting point.

Since TracFone runs on the Big 4 carriers (plus U.S. Cellular), you shouldn’t have too many issues with coverage, unless you live in Tornado Alley.

TracFone is definitely for people who like to text or make calls periodically - but not too much.

Can I keep my phone number, too?

Yes. You can transfer your phone number, so long as it’s active, by calling TracFone’s customer service. They will take you through the process, called “porting,” and within a few hours to a few days your number will be transferred over and usable.

The only information you’ll need to provide is:

Now that it is all written out, that kind of looks like a lot…

Does TracFone have any overage charges?

No. If you use up all your data before the end of your service plan’s length, you’ll have to refill your plan or add extra Airtime or data with an add-on.

Does TracFone have any activation or hidden fees?

There are no activation fees with TracFone Wireless. Nor are there any cancellation fees. Return policies vary, depending on whether you bought it online, or at a retailer (Best Buy, Walmart, etc.). Check out TracFone’s terms and conditions for more.

Do minutes carry over?

In other words, if you buy a plan with a 30-day limit, you will need to buy a new plan prior to those 30 days being over if you want it to rollover.