Verizon and Sprint — they’re 2 of the biggest wireless phone carriers in the world, and part of the Big 4 networks providers in the U.S. Surely you’ve heard of them?

There are stark differences between the two: Verizon regularly places as #1 for network coverage and speed in 3rd-party tests like those run by OpenSignal and RootMetrics, often placing them in first place for the Big 4.

In contrast, Sprint places dead last of the 4 in both areas -- so, they compete with Verizon, AT&T, and T-Mobile by pricing their wireless plans much cheaper and including some great perks.

But how do Sprint and Verizon stackup directly against each other?  You may think it’s an easy win, but don’t be so sure. To find out, we checked out both carriers in categories such as price, plans, data, coverage, customer service, and device availability.

Read on to learn what we found.

Go buy yourself a PS4 with the $300 bucks Sprint just saved you this year.

Additional fees are the same when it comes to both carriers — activation fees come out to about $30, regardless of which carrier you choose. But those are one-time things, and Sprint even waives it if you buy your phone and plan online. Not Verizon, though, so that’s another win for Sprint.

Both carriers offer multiple discounts. First up is the common one -- the autopay discount. You’ll save $5 bucks a line for both carriers. Verizon has a restriction, though: no credit cards. It’s debit only.

The other discounts are pretty widespread between the two, but both offer discounts for certain employers, new subscribers, and military veterans and members.

Sprint even has a plan designed specifically for military members that matches up pretty close to their Unlimited Plus plan:

Verizon’s military discounts give you a broader range of options that can be applied to each of their plans:

Whether Verizon or Sprint’s military discounts will be a good deal depends on you: what plans you’re looking at, your location, etc. Both take care of the men and women in uniform pretty well.

Sprint and Verizon both offer -- and focus on marketing -- their unlimited plans options. Both have 4 options (6 for Sprint if you count the Senior and Military options), but Sprint’s data deprioritization thresholds start out higher than Verizon -- 50GB of 4G LTE data starting at the Basic level.

Verizon, in contrast, only offers 22GB of 4G LTE before they start throttling — except at the Above Unlimited level, which gives you 75GB. But even at that level, Sprint’s top-tier plan option gives you 100GB before slowing you down each month, $5-$15 cheaper, depending on discounts.

That said, Verizon’s plans are pretty well-packed with features, like their middle-tier option, Beyond Unlimited — it has a 15GB hotspot allowance in addition to the 22GB data threshold. Plus, HD video streaming and some international perks, like TravelPass.

But even then, Verizon has a hard time beating Sprint. Sprint offers HD video streaming and a 15GB hotspot on their middle-tier plan as well — Unlimited Plus also includes Hulu on demand and a Tidal music subscription, free of cost. And again, their cheaper.

The win has to go to Sprint here.

When it comes to limited-data options, Verizon offers more than Sprint. Sprint has just one: a 2GB plan. Verizon, however, gives you 3 to choose from: Small, Medium, or Large.

Both carriers offer a lot of multiline options — pretty much any plan is fair game, whether it’s an unlimited, prepaid, or limited-data option. It’s worth noting that again, when it comes to price, Sprint wins out — especially with their current discounts.

But you’ll pay for that when it comes to coverage, as you’ll soon find.

And with Verizon, you’ll get great features, an awesome network, and still-solid discounts for every line you add -- but it still adds up to be pricier than Sprint. 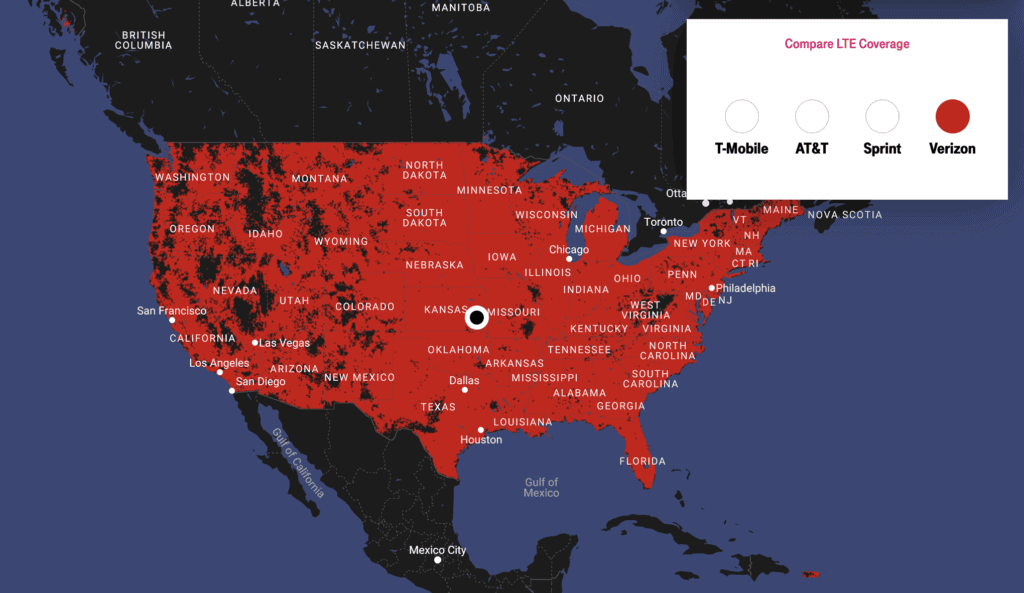 Finally — we reach a very important point: coverage and performance. We’ll spoil the comparison right away:

Verizon Wireless simply has better coverage and speeds than Sprint and anyone else (although T-Mobile is hard on their tail for speed). According to OpenSignal and RootMetrics, Verizon handily won in nearly every category: 1st place for coverage, and 1st or 2nd for speed.

Sprint, however, did not place at all in any category, coming in deadlast. Their commercials claim less than 1% difference in speed, and their coverage map actually looks pretty good — but no. They’ve never come in 1st or 2nd place for speed or coverage, and studies consistently place them in 3rd or 4th place.

But if you live in a city, metro, or surrounding area, you’ll probably be okay.

That said, though, T-Mobile and Sprint have been attempting to join forces in a merger to improve both of their offerings. That’s been slow-moving, however -- so we’ll see. 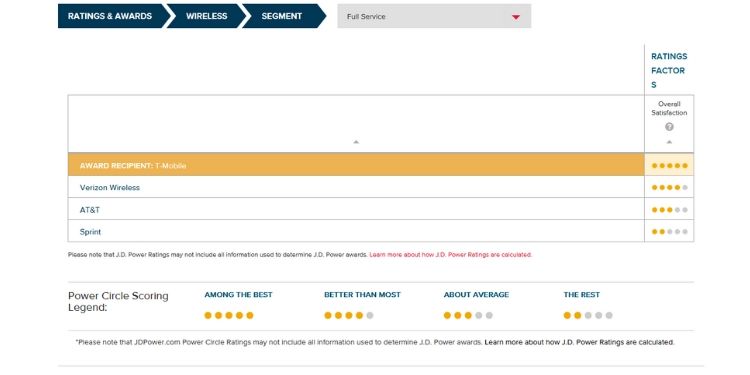 In fact, Verizon was ranked about 11 points above the industry average (Verizon: 822 points; average: 811), while Sprint was ranked well below the average (755 points).

Sprint has some work to do. Hopefully that merger with customer-service leader T-Mobile will improve them here.

Not a comprehensive list. See here for additional smartphone offerings from Verizon and here for Sprint.

It doesn’t matter much if you want the latest iPhone or Samsung Galaxy —  both Verizon and Sprint will have it. And, while Verizon used to have a monopoly on Google Pixels, the Google phones have recently arrived at Sprint and other carriers, knocking off the Big Red’s advantage here.

Really the only difference is if you want a Google Pixel 2, instead of 3 — you’ll have to bring your own with Sprint, while Verizon still carries the older model Google phone in-store.

Just when you thought they were down for the count, Sprint gets back up. Verizon can’t beat Sprint’s perks.

All of Sprint’s unlimited plans come with a free Hulu Limited Commercials streaming subscription. Plus you get international data (2G speeds) and texting in more than 100 countries. At the Plus level you get Tidal music added on, and at Premium you get Tidal, Lookout, and Amazon Prime in addition to Hulu.

Verizon, however, doesn’t give you much for perks: you can get a good deal if you bundle with Verizon Fios internet, but that’s about it — and unlike Verizon’s wireless network, Fios is pretty restricted to the east coast.

If you live somewhere Verizon Fios is available, check out their Double Play or Triple Play if you’re thinking about signing up for Verizon Wireless service -- you’ll get $10 off your phone bill + $10 off your Fios bill.

Recap: Which one’s right for you?

When it comes to overall performance and speed, Verizon is better than Sprint — and any other carriers, for that matter. You can go just about anywhere in the U.S. and be confident that your phone will have good service (within reason). Plus, Verizon has great customer service.

Sprint can’t say the same about either.

That said, where Sprint can beat Verizon is with lower prices and great perks included in many plans. Plans are cheaper, free international texting and data (versus needing to buy a TravelPass at $10 a day with Verizon) is included, and you get great video, music, security, and even Amazon Prime subscriptions thrown in at no charge. So if you live in an area with good Sprint coverage, it may be a better bet and you might not notice a difference in performance.