Comcast Xfinity offers a lot of variety when it comes to plans-- and speeds are fast and reliable. We do wish their customer service was a bit better, though.

Comcast Xfinity is one of the largest and most widespread cable internet service providers (ISPs) in the U.S., with consumer and business service available in 41 states. It’s one of the fastest and most reliable around, with Speedtest.net naming them #1 for both top speeds and consistency, contributing to why we named them our #1 overall choice for best internet provider. But Xfinity’s internet provider plans and bundle products vary, plus their prices can be higher than competitors offering similar speeds — so are they really that good? And more importantly, are they the best choice for you or your business? Let’s find out in our rating and review.

*Prices per month plus taxes for length of contract. Additional fees and terms may apply.

While there are a lot of Comcast Xfinity internet options, which is great, there’s a pretty big kicker we found in our review: while varying availability for faster speed internet plans is a general rule with ISPs, changing prices should not be.

That said, you can get some consistent, fast internet plan choices for “okay” prices in most product cases. But not always — the Xfinity Blast! Pro internet package nets you a top-end speed of 250Mbps for $59.99 a month, while Charter offers up to a 200Mbps product package for about $45.

Yet it’s worth remembering that you’re more likely to actually reach faster speeds with Xfinity than with Spectrum, which we’ll discuss a little later.

As a cable provider, Xfinity also offers a variety of bundles that give you decent combos of internet speed and cable channels — my options were bundling anywhere from 140 digital channels to almost 300 cable channels, including popular ones like ESPN, HGTV, and TBS. The third option even gave me HBO, CINEMAX, and SHOWTIME pay cable channels.

A cool thing that Xfinity offers is the “Flexible Data Option.” It’s a cool deal designed for super light data users and is available for Performance Starter customers. Basically, you get back $5 if you use 5GB or less of data per billing period.

So as an internet provider, Xfinity recommends you take the time to track your data on the normal pricing tier first to see if it’ll be a good fit for you. It’s also important that you’re aware of how visitors might be using it; for instance, don’t let someone download a huge 50+ GB game.

More great news about Xfinity: if you are looking into getting Xfinity internet only, they offer both no-contract and annual provider options. Go with the agreement, and you’ll save about $10 bucks monthly – which could net you a total of $120 in savings over time for the year for your home or business. Not bad.

Still, if you prefer no-contract, you can do that and cancel any time, no fees.

And a side note: once your comcast internet deal as a new business or home customer is over (with the 12-month pact), expect the bill to go up by $15-$20 a month.

That said, Xfinity takes back some of the power it exchanges in giving no-contract options by tacking on fees. The “good” news is these are fees that are standard for most ISPs, so nothing new here when compared to competitors:

One thing Xfinity definitely has going for it is some of the fastest and most reliable uploads, including the highest top speed: 2,000Mbps, or 2Gbps — and Comcast Xfinity Internet reviews show it’s more than double their competitors AT&T internet or Charter.

According to the FCC rating and reviews, you’ll actually get the speeds you desire when you subscribe to Xfinity. While previous reports and reviews indicated that 80% were getting at least 99% of advertised delivery (not bad at all), the latest report actually shows a higher percentage getting greater than 100% of what’s advertised.

Essentially, the first reviews showed that if there were 100 people that had purchased 100Mbps, at least 80 of them were getting 99Mbps; the latest report, from 2018, showed users getting greater than 100Mbps download speeds on average.

Other speed tests, rating items, and reviews have shown Xfinity not only to be fast but also reliable, too. Ookla’s speedtest.net was one such test, with 84.5% of speed samples taken from a variety of different regions met or exceeded a minimum threshold of 25Mbps. Charter was the next-closest for reliability, with 83.5% of samples achieving the same result.

All in all, our rating and reviews show Xfinity’s delivery is one of the best in the industry.

All in all, Xfinity’s internet performance is one of the best in the industry.

Comcast Xfinity does apply a data cap over 30 days. However, it’s a 1TB cap — you’d have to play video games 48 out of 24 hours a day for 30 days without stop, plus binge 629 episodes of the Simpsons in HD to use it all up over a 30 day period.

But, if you’re one of these super-users, Comcast offers an Unlimited Data Option. It costs $50 higher per month, but your account won’t face any overage charges.

You’d have to use 5 whole extra 50GB blocks, or 1250GB total, to actually make it worth paying that $50, though. Because of this and the generous data allowance, Xfinity strongly recommends you track your data from your account before upgrading.

J.D. Power reviews ranked Comcast Xfinity with just 2 power circles in 2018, labeling them “The Rest” (i.e. average or below). The American Customer Satisfaction Index scored them 60/100, putting them in the middle of the pack. Given the internet service industry’s poor record in reviews for customer service and experience, that’s about what can be expected.

Online reviews are none too kindly to the cable giant in customer support, either, complaining most about service outages, expensive billing, and a lack of personal attention over the phone and by email. As always, it’s important to remember that forums and reviews reflect a minuscule portion of the experience of subscribers, and typically the ones with the worst things to say.

In any case, Xfinity’s customer support center is fairly easy to navigate. They offer a wide range of ways to contact them, as well as community forums: Phone: 1-800-934-6489 Twitter: @Xfinity Messenger Xfinity Support Forums Reddit

Xfinity has a strong set of product security features, but our review and other reviews show you will have to shell out extra money for some of them.

Comcast Xfinity vs. The Competition

Comcast’s fees start at just $29.99 (in some areas, $19.99), making them at first glance the cheapest of those we compare here. But, that’s also for the lowest data levels (15Mbps), too. Comparable starting levels (100Mbps for competitors, 150Mbps for Xfinity) favor Xfinity slightly more, and then at the top of competitors’ speed (940-1000Mbps) Xfinity balances out about right.

But, as prices are pretty similar across the board, there are other reasons for customers to consider different provider choices.

AT&T Internet ranked well in satisfaction for customers by the ACSI, just 1 point behind Verizon Fios. They actually earned the #1 spot by J.D. Power in 2018, too. And when it comes to price-for-data, you might get a little more out of AT&T.

For example, AT&T internet starts at 100Mbps for just $40 a month. Comcast’s closest tier to that gives you just 60Mbps for $34.99. A small difference, certainly, but it’s an extra 40Mbps of speed for just a few bucks versus other providers.

Charter Spectrum’s plans start at 100Mbps -- more than 5 times higher than Xfinity’s beginner pack. It is true, however, that you can get 50Mbps more from Xfinity’s Performance Pro service for the same price -- assuming those speeds are available in your area.

That aside, Charter typically comes in about the same or a little cheaper. In some cases, it can be more expensive, depending on what levels you’re able to get.

Charges are similar, but Verizon Fios is only available in about 9 states currently, all on the eastern seaboard.

Our review shows Xfinity is reliably fast and available across the country. Pretty much no matter where you are in their coverage area, you’ll be able to get at least 25Mbps. Whether that is at an affordable rate will depend on the plans available for you — other ISPs may provide better.

We’d like to see Comcast improve its phone customer service and be a little more transparent about plans and pricing. But, as available speeds vary across the country, we can certainly understand it to some degree.

Overall in our review, we still think the company tops much of the competition nationwide as the best overall internet service provider for most people.

What’s the difference between ‘Comcast’ and ‘Xfinity’?

Is Comcast Xfinity available where I am?

Xfinity is available as a company in 41 states, so it’s quite possible that they are. However, as they are a cable provider company, they’re more limited to cities and surrounding regions. For example, take a look at this company coverage map: 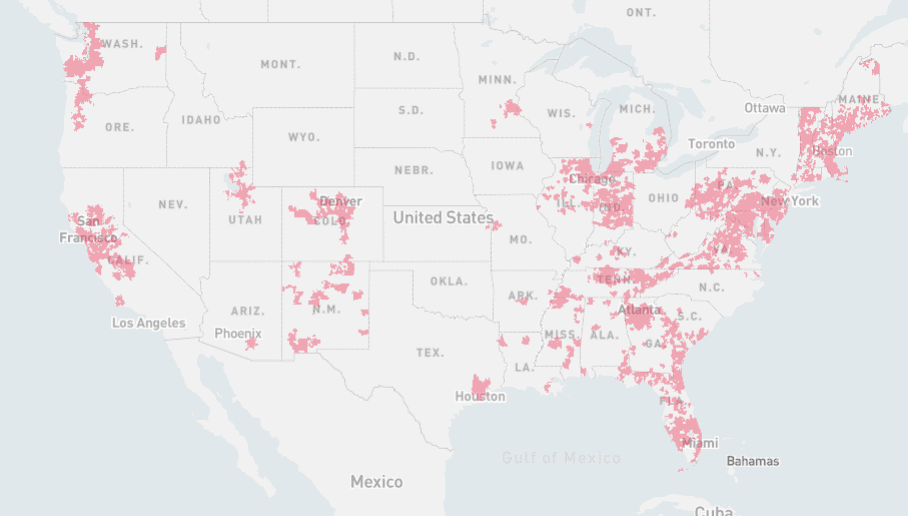 In less populous areas, like the American West and southwest, Xfinity is not available. You can use this link to input your zip code and see if the company and its phone service are available where you live.

What speeds do I need for my household?

That depends on what you do online, and how many users are typically on at a time. For example:

Other things aside from number of devices and usage can affect your speeds, too, though.

Comcast uses primarily old-style copper coaxial cable to provide service. However, they’re beginning to offer some fiber-optic or partial-fiber-optic service in some areas, but this is a work in progress at the time of writing.

Despite a mobile phone access offering, traditional cable is still Xfinity’s primary means of providing service as a company.

Yes. As of October, Comcast as a company offers a connection service called Internet Essentials that’s made for customers that participate in the National School Lunch Program or that receive assistance from various government programs in their location. Internet Essentials carries a price of $9.95 per month for a connection. There’s even a type of an option to add a low-priced computer from the company with the services in this program.

What are the best Xfinity Internet speeds?

For the majority, Xfinity internet speed is good news, as 150 Mbps to 250 Mbps are common download speeds available as of October. However, if you live in the right area, you can access Gig services, which have download internet speeds as fast as 2,000 Mbps. You can enter your address on the Xfinity web site to see what speeds and services are available in your area.

Can I order Xfinity Internet without any other cable services from Comcast?

How long does it take to install Xfinity?

As of October, installation for Xfinity customers can require up to four hours if you need an internet providers company technician to visit your home. However, if you are able to use the DIY option, installation can take only an hour or two.