Peter Kafka in All Things D, says Time Inc. has been unable to get Apple to let it sell and manage subscriptions for its iPad apps — much to Time Inc.’s surprise.

Last month, the publisher was set to launch a subscription version of its Sports Illustrated iPad app, where consumers would download the magazines via Apple’s iTunes, but would pay Time Inc. directly. But Apple rejected the app at the last minute, forcing the Time Warner unit to sell single copies, using iTunes as a middleman, multiple sources tell me.

Since then, Time Inc. executives “have been going nuts”, trying to figure out how to get Apple to approve a subscription plan. One of the more desperate suggestions, which apparently didn’t get traction: Pulling the publisher’s apps out of the iTunes store altogether.

No other magazine publisher has approval sell their own iTunes app subscriptions, either, says Kafka. But Apple and Steve Jobs had made a point of reaching out to Time Inc. executives and editors before the iPad’s launch, and encouraged them to build digital editions for the platform.

Should newspapers put up paywalls? Pro-paywallers, like Rupert Murdoch, say absolutely! Newspapers must charge for costly reporting in order to survive! Anti-paywallers argue that papers can’t afford to shut out the open and free web.

Google and Apple are developing tablet ads that know your preferences. That makes on-line ads more valuable. Subscription revenue – it is hoped – will cover the other 40% of the revenue — as in print. Print production and distribution eats up about 30% of publication costs.

Some 70 socioeconomic categories (like savvy singles), are defined by data companies like Acxiom and Intellidyn. Everyone from marketers to politicians use clusters.

Now the multi-billion dollar data mining industry taking target marketing into a New Frontier. Every time you swipe a rewards card at a store, that data goes somewhere to get analyzed. Marketplace’s Stacey Vanek-Smith takes a look.

Cluster analysis takes a statistical approach. Documents are read and words are tracked in relation to other words.

Every time you search the Internet, you punch something into your mobile phone or you write on someone’s Facebook wall, there’s a giant industry right behind you sucking up all that data and using it to figure out how to sell you something.

The National Center for Data Mining is a center of the University of Illinois at Chicago, established in 1998 to serve as a resource for research, standards development, and outreach for high performance and distributed data mining and predictive modeling. 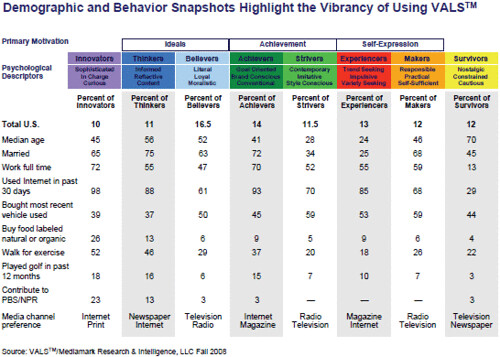 In their seminal 1970 book, Cluster Analysis, co-authors Daniel Bailey and William Tryon had applied the technique to four decades of U.S. census data. Products like Claritas’s PRIZM, Strategic Mapping’s ClusterPLUS 2000, NDS/Equifax’s MicroVision, and CACI’s ACORN use data from the decennial census and other sources to separate the nation’s neighborhoods into clusters, with 50-100 subgroups.

Recorded Future scours tens of thousands of websites, blogs and Twitter accounts to find the relationships between people, organizations, actions and incidents. The investment arms of the CIA and Google are both backing the company.

Facebook isn’t trying to become the central site for the web; it’s putting itself onto all sites. Facebook has 500 million monthly active users, and over 1 million websites have integrated Facebook functionality.

Any newspaper interested in relevance can now offer a $149 Android Tablet or a $139 Kindle for $99 with a one-year subscription (at $12.95/month). iPad ads reportedly generate 5 times the revenue of web ads. Subscriptions bring in stable cash flow.

If that’s not a business, I don’t know what is.

I’ve been a WiMAX fanboy for one reason — cellular providers can kill this baby.