AT&T Wireless vs T-Mobile in 2019: Plans, Coverage, and Speed Comparison

If you’ve checked out any number of phone plans, you probably already know this: the United States mobile phone industry has 4 major players, or “Big 4:” Verizon, T-Mobile, AT&T, and Sprint.

Of these 4, AT&T and T-Mobile take 2nd or 3rd place in different categories – we’ll take a look at those later (T-Mobile coverage map vs AT&T’s, anyone?).

T-Mobile gives great perks away like they’re candy; AT&T has been a solid performer for years and updated their unlimited plans fairly recently.

Both have their ad campaigns: “More for your thing” (AT&T); and the “Uncarrier” (T-Mobile). But setting aside their hyped-up campaign promises, which one is really better? What do both carriers’ plans look like? Is T-Mobile better than AT&T?

We uncover the answers to those questions and more in this guide. Read on to find the answers you seek.

Historically speaking, T-Mobile’s prices have always been on the cheaper end of things, near Sprint. Likewise, AT&T’s have been on the higher end, over by Verizon. In all honesty, that hasn’t changed much – but it has a little.

Let’s dig into both carriers’ unlimited and family plan options.

When it comes to unlimited plans, we’re actually fans of T-Mobile. Here’s why.

For the first-tier option (both offer just 2), T-Mobile ONE has the better set of features for the price – specifically, a 50GB data deprioritization limit (i.e. the data amount after which you’re slowed down) and included 3G Wi-Fi hotspot.

In contrast, AT&T’s first-tier Unlimited &More costs the same as T-Mobile ONE ($70/month), but you don’t have a hotspot and you can be deprioritized at any time.

However, jump up to the next tier and the comparison is a bit more nuanced – but we still give the win to T-Mobile.

T-Mobile ONE Plus gives you the same generous 50GB data limit, but you get a few more boosts, too: 20GB of 4G LTE hotspot, 720p (HD) video streaming, and some extra data when you travel internationally.

AT&T Unlimited &More Premium is better than the first-tier, too, offering extra perks to try and compete: a 15GB 4G LTE hotspot, deprioritization after 22GB of data use, 1080p (HD) video streaming, and the WatchTV app – all for $5 cheaper than T-Mobile ONE Plus.

So at this level it depends more on what you use your phone for:

It’s worth making a note of T-Mobile’s 3rd unlimited data plan: T-Mobile Essentials. In essence, it’s a stripped-down version of T-Mobile ONE. There are just a few key differences:

*4G LTE speeds are slowed to max of 128Kbps once limit is reached.

When we check out family plans, AT&T wins for a simple reason: they offer more options.

Specifically, they actually offer options geared toward family sharing. If you don’t need unlimited data, AT&T’s Mobile Share Plus plans are great: choose from either 3GB or 9GB of data, which includes a mobile hotspot and is capable of rolling over.

You also get unlimited texting to over 120 countries and unlimited talk, text, and data in Mexico – sweet.

Of course, the downside is that everyone on the mobile-shared plan has to share that data allowance – so if you need more that 9GB, you’ll need to shift gears toward an unlimited family plan. Here, you get options with both carriers.

Both T-Mobile and AT&T offer good multi-line discounts on their unlimited data plans. Depending on which tier you’re looking at, you’ll save more money with one or the other: 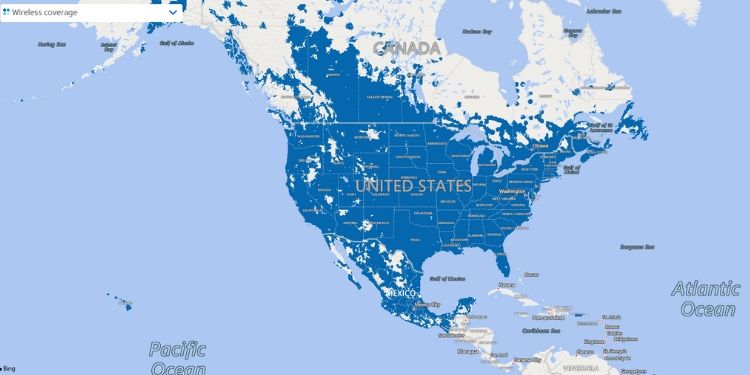 Coverage means the total area in which you get service from a carrier. Speed is – well, speed. Each carrier takes one of the two categories here.

AT&T has consistently performed well according to Rootmetrics and OpenSignal, cleanly passing up T-Mobile for overall coverage. It’s just a fact at present: AT&T performs better than T-Mobile in country; T-Mobile struggles there, but performs well closer to civilization.

Speed is another story, though: referencing OpenSignal’s 2019 Mobile Network Experience Report gives that win to T-Mobile. Even though AT&T can get you a signal more widely, everywhere both carriers exist T-Mobile brings faster speeds to its users.

AT&T and T-Mobile are neck-and-neck when it comes to phones: you’ll find pretty much the same selection of flagship Apple and Android devices at both, alongside, LG and more.

But T-Mobile has Google Pixel, and AT&T doesn’t. If you care about that, or just like having the option, T-Mobile gets the win here. 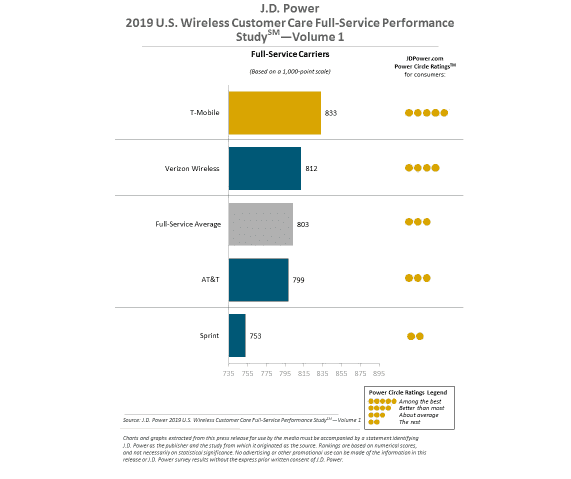 The cell phone industry is not known for its stellar customer service reputation. However, J.D. Power runs studies every year and assigns points and “Power Circles” to the carriers.

The latest places T-Mobile clearly in the lead for customer satisfaction, giving them 5 Power Circles. AT&T came in 3rd place, just below the average and well behind T-Mobile and Verizon Wireless.

Both AT&T and T-Mobile have some great perks included in their unlimited plans. We find them so different from each other that it really depends on what floats your boat more.

TV lover? AT&T’s perks might stir your heart. Their WatchTV app gives you over 30 live and on demand channels, like the Food Network, TBS, and HGTV.

Travel a lot or looking to save on your Netflix bill every month? Hit up T-Mobile’s selection of perks.

AT&T Wireless vs T-Mobile: Which one is better?

The short of it is this: it’s hard to pick one winner. Both AT&T and T-Mobile have unique offerings. Let’s break things down:

Can I use a T-Mobile phone at AT&T?

It depends. If your phone is unlocked and is compatible, then yes – you should have no problems. Use this link to check.

How do I switch from AT&T to T-Mobile?

It’s pretty easy – you can check out this link for general info, regardless of your current carrier.

To start with, if you want to bring your phone, check here to see if it’s compatible. Check if your phone is locked into the AT&T network, too; if it is, call customer support and request that it be unlocked.

Or, you can trade your phone for a new one. Use T-Mobile’s trade-in value checker to see how much credit you can get from your current device.

Next, check with AT&T to see if you’re going to have pay any termination fees. AT&T doesn’t do contracts anymore (thankfully), but if you have your phone on an installment plan (i.e. AT&T “Next Up”), you will have to pay the remaining balance on the phone when you cancel.

Luckily, T-Mobile will pay off your phone balance up to $650 when you trade it in and port over your number.

Finally, pick your plan and get going! You can 1-800-T-MOBILE to get help from the experts if you get stuck.