Starting today, you can call any phone right from Gmail, says Google, at a company press conference today. Dialing a phone number works just like a normal phone. Just click “Call phone” at the top of your chat list and dial a number or enter a contact’s name. It’s similar to Skype Out.

Gmail voice and video chat uses your computer’s microphone and speakers. But until now, this required both people to be at their computers, signed into Gmail at the same time. Now you can call any phone. Right from Gmail. So far it’s only available for desktops computers.

Google Voice is free between the United States and Canada for at least the rest of the year. Calls to Mexico are 10 cents a minute. International calls placed through Gmail have per minute fees ranging from .02 cents to $4.99.

You will need to install the Google Talk plugin for Windows, Mac and Linux. Google plans to roll this functionality out over the next few days.

To make a call, just click the Call phone link in Gmail and enter any number or name from your address book. You can take the call or even listen in as the caller leaves a message, in a single step right from your computer.

If you are a Google Voice user, your Google Voice number will appear as the outbound called ID number on calls made from Gmail. You can also opt to receive inbound Google Voice calls from inside the GMail interface.

You have to ask the question; if Gmail voice becomes available for the mobile (and why wouldn’t it), who really needs a voice network? Samsung’s Epic 4G (above) is $50 more than Sprint’s $200 EVO 4G, but it includes a handy keyboard.

Verizon and Google may have reached some kind of agreement on how (or if) the technology is used on Verizon’s wireless network. How Google’s disruptive technology will play out over the world’s phone networks remains to be seen.

Revenue from mobile phone calls could be wiped out by the next wave of technology because network capacity would justify free phone calls, says at least one telecommunications analyst.

Bennelong SGI portfolio manager Scott Klimo says the ”golden goose” of mobile voice revenue, which delivered $3.3 billion to Australia’s Telstra and about $2.6 billion to the country’s Optus network in 2009-10, will be hard to maintain when more calls were being made over wireless internet.

”The irony is that 4G, by providing more capacity for data connections, will provide vastly more capacity than will ever be required for voice communications,” Mr Klimo wrote in a research paper due for release today. 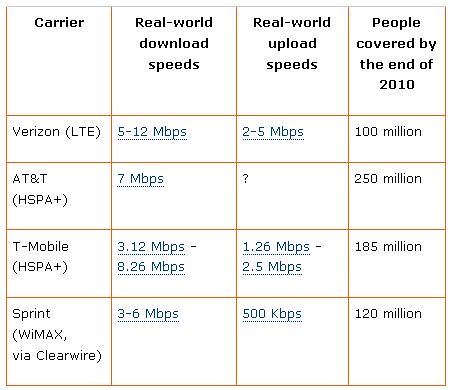 Mobile broadband currently accounts for only 10% of total mobile subscriptions but a rapidly increasing majority of the traffic, says Ericsson. Mobile data traffic now surpasses voice and it will continue to grow indefinitely — but voice makes more money.

Yankee Group predicts total mobile phone revenue to reach over $1 billion annually by 2013, with data revenue representing one quarter of the returns. LTE’s main markets will be the developed nations of North America, Western Europe, the Far East and China, which together will account for 90% of the market by 2015, says Juniper Research. ABI also expects data volumes to grow by a factor of 30, resulting in a 100-fold increase in offloaded traffic, such as WiFi hotspots and femtocells.