As Probasco roams the floor of the hangar his Nokia N9 detects his location and pushes him information about the different planes.

The test is part of the Cambridge TV White Spaces Trial, which has brought together a consortium of 17 leading technology and media companies to Cambridge.

Currently, most indoor location is based on WiFi positioning. There are several commercial providers of this type of service, including Google, Navizon and Skyhook Wireless.

At Where Conference 2012, Urban Airship announced a partnership with Meridian, which makes apps that guide smartphone users through indoor venues, such as malls, bookstores and museums.

Meridian has a new service to deliver geotargeted push notifications. Called Segments, the service marries the company’s platform for deploying real-time messages and in-app purchase content with geospatial data amassed by SimpleGeo, a startup acquired by Urban Airship in October. 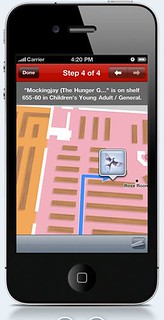 With the ability to know an individual’s location and context, not just where they are right now but where they are over time, you end up with a powerful combination of insight, explains Urban Airship CEO Scott Kveton