If you’re a single subscriber and already an Xfinity customer, Xfinity Mobile can be super affordable. But if you need more than 1 line or international service, prices climb fast.

Comcast Xfinity is one of the biggest TV, internet, and landline phone service providers in the U.S. - but you probably already knew that. Yet since May of 2017, Xfinity added another player to their roster: wireless phone coverage.

Acting as a Mobile Virtual Network Operator off of Verizon Wireless’s cell towers, Xfinity also uses millions of hotspots across the country to further bring costs down for customers — between the two, they’re able to offer some seriously cheap services.

But why is that? In order to get Xfinity Mobile, you need to be an Xfinity Internet customer already. So assuming you are, or are considering becoming one, is Xfinity Mobile a good pick? Are the affordable prices too good to be true?

The numbers say otherwise – 1.2 million subscribers at the end of 2018 – but we needed to find out for ourselves. Let’s dive in.

*Not including taxes and fees required by local, state, and federal laws.

Xfinity Mobile has some decent prices to start with: if you use 1GB of data, you’ll start at $12 a month, plus taxes and fees, for the By the Gig plan. With unlimited, you’ll pay $45 a month per line.

Both of the just 2 plans give you unlimited talk and text for completely FREE, so the main differences are in data allotment and what you pay for it.

When you sign up for the By the Gig plan, you get your free talk and text, countrywide. Then, you’ll pay $12 for every 1GB that you use. A cool thing? If you use less than 100MB, you won’t have to pay those $12 -- so you could theoretically pay just the “taxes and fees” part of your bill -- pretty sweet.

But again, you get 100MB free — and Xfinity has millions of hotspots setup around the country, so it’s entirely possible to just jump from hotspot to hotspot and pay just a few bucks a month for your phone.

In any case, while cheap, Xfinity doesn’t give you the best by-the-gig pricing: Republic Wireless charges just $5 per gig, and Google Fi charges just $10. But, both of those charge you for your unlimited talk and text ($15 and $20 a month, respectively), while Xfinity does not.

Xfinity Mobile’s unlimited plan costs you $45 bucks a month for unlimited data — but like every “unlimited” plan ever, it’s not really unlimited. Once you hit 20GB of 4G LTE data used for the month, Mobile will throttle you down to the tune of about 1.5Mbps — dragging speeds.

While that’s standard across the industry, Xfinity’s data threshold of 20GB is a bit low — AT&T and Verizon offer 22GB, and Sprint and T-Mobile give you 50GB or more for highspeed data before slowing you down.

The price is about right, though — at $45 a month, you’ll pay much less than T-Mobile, AT&T, or Verizon. Although Sprint’s Kickstart plan is just $25 a month, you can get throttled at any time, making Xfinity’s unlimited plan a bit better deal.

Xfinity Mobile doesn’t really offer any family plans, or multiline discounts — just multiple lines per account. If you choose By the Gig, you’ll share your data; likewise with Unlimited — you’re just counting toward you 4G data cap, instead of the next $12 gigabyte.

The biggest thing to notice about the table is something it’s lacking: discounts for extra lines. Most carriers (nearly all) offer escalating discounts for each line that you add. For example, Sprint’s current deal is $20 per line when you have 5 lines on your plan. That deal alone is a much better one than going with multiple lines on Xfinity Mobile: you’d save over $100 a month and have more than double the data cap (50GB).

So if you need more than 1 or 2 lines -- definitely go with someone other than Xfinity Mobile.

That said, there are other ways you can save some money on multiple lines with Mobile: mix-and-match. Unlike some other carriers, with Xfinity you can mix and match By the Gig and Unlimited plans between the members of your plan.

So your sister can have By the Gig for 2GB ($24/mo.), you can get Unlimited ($45), and mom and dad can grab By the Gig (2GB) or Unlimited for a grand total of $138. Still not quite as good as Sprint’s current deal, but on a better network and everyone gets only what they need.

More good news about Xfinity Mobile - there’s no overage charges or hidden fees. You know up front that if for every 1GB you use, you’ll pay $12. But, as alluded to, there are some taxes that are not included in the monthly price.

But, those are usually just a few bucks a month – about $2-$3, depending on your state.

There also aren’t any activation fees or contracts. Cancel before your next billing cycle and you’ll only have to pay what you use in the current month – then you’re free. 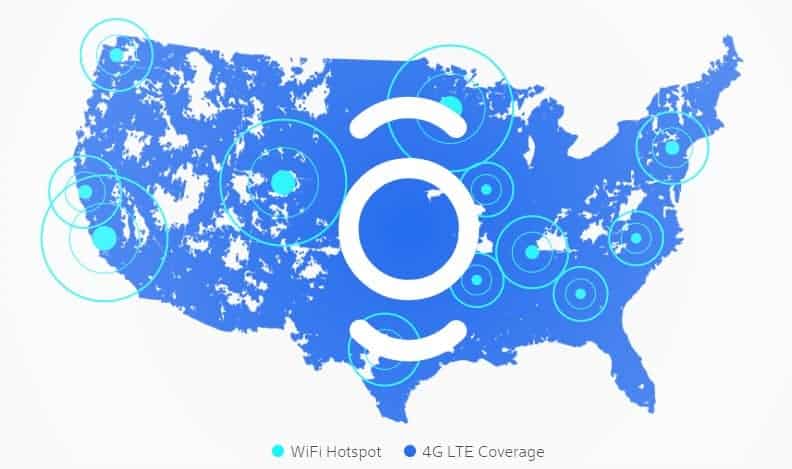 Xfinity is able to offer some fast speeds, especially for an MVNO — 5-12Mbps for download speeds and upload speeds of about 2-5Mbps. Some users have even reported speeds of between 40 and 70Mbps, which is crazy fast.

How does Xfinity Mobile work? In 2 ways.

Mobile Virtual Network Operators lease space on larger carriers’ cell towers, which they then are able to sell to customers for cheaper than the larger carriers do themselves. Xfinity hitches a ride on Verizon’s network — the #1 for coverage according to RootMetrics and OpenSignal, as well as speed (tied with T-Mobile in the latter study).

Typically, large carriers like Verizon slow down (or “throttle”) MVNO users’ speeds, but again, users have reported differently. In any case, you can expect good speeds, although in congested periods you may be throttled on Xfinity Mobile in favor or Verizon’s direct customers.

Xfinity Mobile also employs more than 18 million WiFi hotspots nationwide to help users save on data and nab some faster speeds. With your Comcast and Xfinity Mobile subscriptions, your phone’s connection automatically connects to any nearby Comcast WiFi hotspots whenever they come in range.

In theory, this should help your speed; plus, it’ll save you data if you’re on the By the Gig plan.

Between running on Verizon’s #1 network and using WiFi hotspots around the country, Xfinity Mobile’s coverage map looks a lot like Verizon’s: widespread, both in metro and rural areas. That said, numbers about actual performance are scarce at the moment, as the carrier is still fairly new.

Xfinity Mobile primarily sells flagship phones from big names: iPhone and Samsung. Google-lovers will be out of luck, as they offer no Pixels as of yet; but, since Verizon held that monopoly for a long time and Sprint and T-Mobile have only recently gained Google Pixels to their lineup, that should come as no surprise.

A big downside with Xfinity Mobile is a very limited ability to bring your own phone over. As of right now, the only BYOP option are iPhones 5 and newer. There’s no bringing your own Android, and definitely no Pixel yet.

That said, Xfinity Mobile’s website is updated to mention Samsung Galaxy as an option for bringing over, but when you click on the link, you get the message “Compatibility is coming.”

Xfinity Mobile also doesn’t offer any tablets, WiFi hotspot devices, or other connected devices – so their selection is pretty limited to just those newest phones.

Xfinity offers some pretty decent promos frequently, typically centered around receiving a prepaid card in exchange for something. For example, here are their current deals:

Since Xfinity Mobile is still relatively new, there isn’t much data on their customer service. That said, the 2018 American Customer Satisfaction Index survey ranked Comcast Xfinity as 7th place for ISPs and 10th for landline phones.

But, no ISP has great customer service, nor do most wireless cell phone providers. Time will tell how Xfinity Mobile ranks.

And with that said, Mobile’s online support center is well setup, with plenty of FAQs and How-to’s. Like most carriers, they offer multiple means of contacting them:

If you’re already a Comcast Xfinity internet customer, Xfinity Mobile can provide some good service for an affordable rate. That said, that’s primarily true when you only need 1 or 2 lines -- beyond that, monthly rates shoot past bigger carriers for fewer features.

So if you’re looking for a good family plan or multiline discounts – go elsewhere. Otherwise, the By the Gig plan is good if you don’t use much data or are able to take advantage of WiFi hotspots – although it’s not the cheapest by-the-gig plan. The Unlimited plan is cheap and not a bad deal when compared to other MVNOs.

How do I cancel Xfinity Mobile?

You can’t cancel online; you’ll need to call their customer support number to do so. There are no penalties, just cancel 30 days before the start of your next cycle to avoid charges next month.

Are there any bundling discounts with Xfinity Mobile?

No. To begin with, you need to be an Xfinity customer already, and there aren’t any further discounts. We imagine they look at their cheaper price and membership requirements as a “bundling discount” in itself.

Can I keep my phone number?

Yes. Follow the link and instructions on this page to find out how.