Trying to compare satellite and cable TV isn’t easy –  there’s no clear-cut winner in most cases. Both give you great, popular channels, HD DVRs, access to sports, news, and locals, and even Netflix integration.

But both satellite and cable TV have their benefits and drawbacks, and you might not be ready to cut the cord completely – so which one is better? We hope to answer that question for you today.

How we evaluated cable vs satellite TV

To get as clear an answer as possible for this comparison, we’re going to focus on 6 categories (technically 7, but we lump 2 of them together because of their close relationship):

For each category, we discuss the merits and demerits of each TV service type and do our best to declare one a winner over the other based on the facts.

*With 2-year agreement. Price rises in months 13-24 for DIRECTV.

Both satellite and cable TV providers offer tiered package options. However, satellite TV providers require 2-year contracts; most cable TV companies do not. There are a lot of things to consider, though, so let’s tackle them one at a time.

DISH’s price is locked in for 2 years: you get higher channel counts than the cable options at a better monthly price – so things look pretty good for satellite. DIRECTV, however, has a price jump in the 2nd year of your contract – taking each plan’s monthly rate up a noticeable amount.

That’s not so good for satellite.

However, while cable providers typically don’t require contracts, those advertised rates - which in some cases, depending on the plan, are lower than similar satellite packages - only last for the first year. After 12 months, your monthly rate will jump; maybe not as high as DIRECTV, but still very noticeably.

Depending on the plan you choose, these jumps on both satellite and cable side come out to a wash overall.

Taking total channel numbers into account, satellite comes out looking better than cable options in most cases – so we give the nod to satellite. 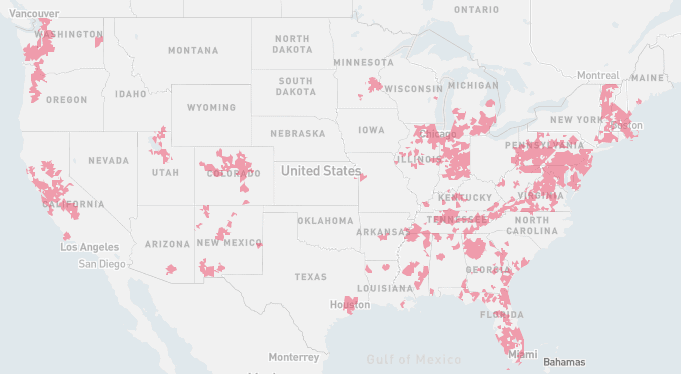 Cable TV is available to you if you’re in your provider’s coverage area - meaning their network. They rely on underground cable lines, and these often don’t reach out into more rural areas, which excludes that population.

That said, Xfinity and Spectrum are in 40 and 46 states, respectively – so if you live near a city, you’ll be just fine.

However, satellite TV is available anywhere there’s a clear view of the southern sky.

But with that “southern sky” caveat, there are times when cable TV is more practical – like if you live in an apartment building that shares a wall with another building on the south face; or there’s large obstacles like trees, barns, cliffs, or other things in the way.

Still, in terms of overall availability, the win for this category goes to satellite TV again. 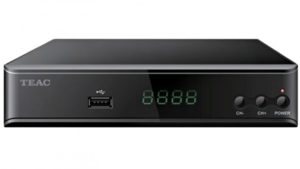 For cable TV, you need wiring in your home. Wiring runs from a central line in your neighborhood to your home, hooks in via a small box on the exterior, then runs by another cable to your wireless router (if internet, too) and a set-top box on your TV.

Typically, it’s pretty simple and easy – technicians come out, plug into your cable outlets, and run that to set-top box. If they need to run wiring inside the home, they’ll do so. Some companies even offer DIY installation for cheaper if your home is already setup with cable wiring.

The main issue you may run into are if the underground wiring needs to be replaced or installed in the first place - in which case they’ll likely contact your utility company to do so.

However, once your cable TV is installed, the only equipment you’ll see is the set-top box.

Satellite TV, on the other hand, requires a pro to come out, mount a satellite dish on your roof or the side of your home, then run wiring down into your home to a modem/gateway before being connected to your TV. The satellite dish also needs to be configured and pointed the right direction.

With satellite, you typically can’t self-install, and you wind up with an unsightly dish on the exterior of your home. It’s also more exposed to damage from the weather, and you’ll likely lose a signal during bad storms.

So cable is our pick here.

Both satellite and cable TV options offer many of the same options, including premiums like HBO, SHOWTIME, CINEMAX, etc. With both cable and satellite, you’ll likely even get some premiums for free for a few months.

But which one is better? Well, that depends on what you prioritize higher.

For instance, cable TV may carry local programming, like public access stations, more readily than satellite. But this depends on your location.

However satellite, being that it includes the entirety of the nation in its coverage area, may offer both east- and west-coast sports. And while cable may offer some international channels, satellite typically offers more options for free.

Ultimately, this category comes out to a wash for us - it really depends on what you want, especially since both types of TV are being forced to compete with cord-cutting alternatives by allowing subscribers to tailor packages to their specific desires. 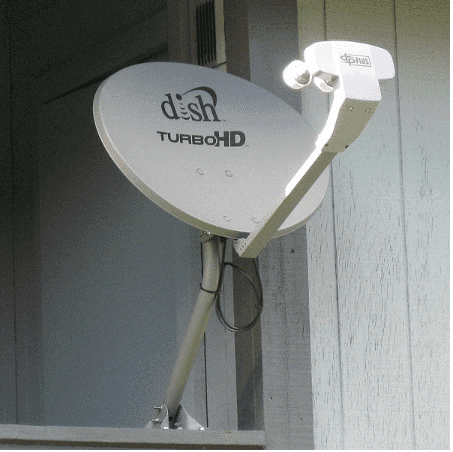 Picture quality is super important – we want to see that game-day touchdown in crystal clear quality, like we’re there. Nearly every TV nowadays is an HDTV, and there’s 4K out now, too – so you want a TV service that will allow you to use your TV’s capabilities.

Unfortunately, however, in a lot of cases the resolution your TV is able to do is greater than what can be transmitted by cable or satellite. Not always, but often enough. In cable TV’s case, this has to do with its technology.

Cable uses copper coaxial cables to send its signal to your TV set. But operating on a cable means there are bandwidth limitations - limits to how much can be sent. Most HD channels are broadcast to you at 720p - pretty much the lowest-quality they can get away with while still being able to call it “HD.”

Sometimes they even squish it down further, technically taking it below the realm of high definition quality.

Satellite doesn’t have to worry about bandwidth as much (although there are some limits). That means HD broadcasts sent by satellite signal are set at 1080p – a step above cable’s capabilities. DISH and DIRECTV are also working on 4K broadcasts, which is far beyond cable’s current abilities.

So we give this category to satellite TV – not only are they already able to broadcast higher quality pictures, but they also have even better in the works.

The main downside with picture quality to worry about is something we alluded to already – bad weather. During bad storms, your TV picture may run into trouble and even cut out completely. The basic explanation of this is that during these times, your satellite signal is reflected off raindrops or snowflakes (precipitation) and doesn’t reach your dish adequately.

Although it stands to reason that if your dish is covered in snow, you probably aren’t going to have great reception.

In today’s day, you can’t easily get by without internet service. And most people who go to TV providers’ websites looking for TV are at least willing to entertain bundling internet in if it’ll save them some dough.

It’s a pretty clear winner for us here – cable has the better bundling options. The reasons are multifold.

First, cable internet operates on the same technology as cable TV – so when it comes to equipment, it’s as simple as adding a router. Satellite internet requires a separate dish (from a separate service provider than your TV).

Third, cable TV providers often offer cable internet, too. Satellite TV providers don’t – they have to partner with other companies, which are usually limited to satellite or broadband and thus typically slower than cable. Sticking in-company (as with cable) means you get better bundling discounts.

And fourth, tying together the first three points, is that cable TV + internet offers better value-for-money. You’ll tack on maybe $10 a month to lease a router (or bring your own), be able to use the same provider as your TV, and get faster speeds for cheaper.

If you want to see some more great bundles - check out our guide to the best TV, internet, and phone bundles. 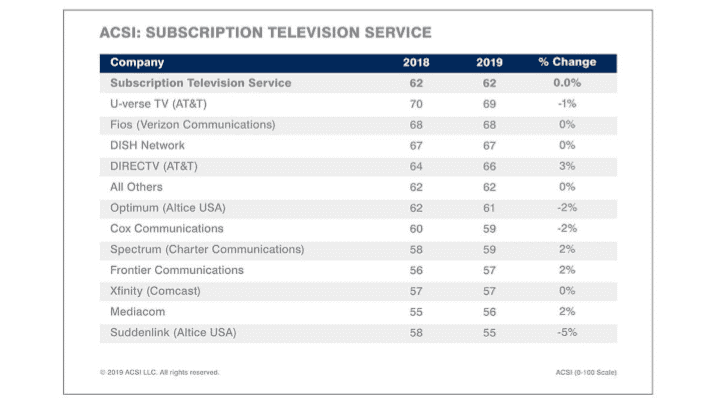 Customer satisfaction is pretty poor as a whole for the TV industry, so the bar is set pretty low. Setting aside online reviews – which tend to skew negative – we took a look at the hard numbers.

But even after going to the latest from the American Customer Satisfaction Index, it’s hard to declare a strict winner for this category. DISH and DIRECTV (satellite) ranked higher than any of the traditional cable TV service providers (Xfinity, Spectrum, and Cox), but U-verse TV and Verizon Fios TV ranked highest of all.

We’re going to call it a tie - but if forced we would say satellite has the edge here when compared with traditional cable TV companies.

It’s a fairly close draw – in many categories, it was a close race between the two. But in the end, we have to give the win to satellite TV.

Of course this is just our analysis. You may have even disagreed with our verdicts in some areas – perhaps enough to shift the win the other way. But that’s fine: if you know what’s important to you, then great – you can choose for yourself if cable or satellite TV is better for you.

What are the major cable TV providers?

What are the satellite TV providers?

DISH Network and DIRECTV are the only satellite TV providers available in the United States. Bell TV is a 3rd North American company, but is only available in Canada.

What are some differences between cable and satellite TV?

Satellite delivers your TV shows by radio waves. Cable uses underground copper coaxial cables that send the signals by electricity to your TV.

That’s a basic summary – here’s how it breaks down: