What is Google’s Nexus Player

Google’s Nexus Player is not only a home media player that is used for streaming Netflix but also a device which can be used for playing games on your TV. This media box is created by Asus for Google. The Nexus Player was launched in 2014. It was the first set-top box to operate Android TV.  It is Google’s new media box and its counterpart for the Apple TV as well as the Roku 3. As compared to previous types of media boxes, this one by Google is crafted exclusively to download and stream videos as well as music from the Internet. But then again, Google Nexus Player is also so much more than that. In fact, it runs a brand new TV-optimized form of Android 5. So that means that it actually goes well together with a wide range of Android apps which are available in the Google Play Store.

Asus has put together the 235g Nexus Player on top of a 1.8 GHz quad-core intel Atom chip. Plus, there is a separate chip which is dedicated to graphics alone for more powered games and HD videos. In addition to that, a total of 8 GB flash storage is provided for downloading and storing games and other apps, at the same time 1 GB of memory must be already big enough to keep the Android 5.0 OS run efficiently. 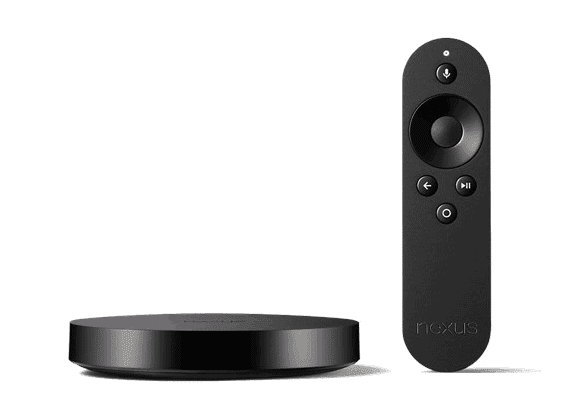 Want to know what is included in the box? Google’s Nexus Player is shipped with a remote control that has an integrated microphone intended for voice search, which was one of the only actually handy features in some of Google TV products which made it to the market. Voice search makes it possible for you to search the Internet as well as the Play Store just by speaking to the remote. In addition to that, there are also two AA batteries for the remote, which connects to Google’s Nexus Player by means of a Bluetooth connection. Also included is a quick start guide as well as a power adapter. However, you do have to note that there is no HDMI cable included. So buying a separate one would be necessary.

One of the main uses of Google Nexus Player, to start with, on top of streaming movies as well as music, is gaming. Google’s Nexus Player boasts 8 GB of internal storage, and that means more space to download and store games that you can play on a bigger screen, which is your TV. In addition to that, when it is time to do more important things, like work, you will still be able to continue the game you were playing where you left off on your smartphone. How cool is that!

Different tech giants have long been waging war against one another for control of our televisions. Through the Nexus Player, Google believes that it has, at last, found a product in which it can sneak in itself into your living room and effortlessly deliver Netflix movies and series to your television. Aside from that, it can also provide you with a lot of Android games and so much more.

What Happened to Google’s Nexus Player

However, unfortunately, according to Android Police, Google has confirmed that its Nexus Player will no longer see an update to Android P, which was the latest version of the OS that was being tested at the time Google’s Nexus Player faced the end of its road. But then again, that was actually seen coming, especially for the reason that it was not included in the list of Google’s Pixel smartphones for the Android P developer preview. In addition to that, this sad news was actually already expected given that Google had already stopped selling the Nexus Player since the summer of 2016. So now, we all have the official confirmation – Google’s Nexus Player is dead.

Google has stopped the direct sales of the Nexus Player set-top box, but you can still make the most out of your TV with these TV Service Providers. To sum up, Xfinity TV is the best overall, but if you are a sports fan, DIRECTV is the clear winner.

The hockey puck-shaped tech gadget has not been available from major retailers, such as Best Buy for several months already. There was actually just a short-lived restock, but it was probably just for the purpose of getting rid of the last few units. And now, Google has pulled the Nexus Player’s store listing… completely.

The Potential of Google’s Nexus Player

The Nexus Player comes with a few bugs. In fact, it does not feature an app library that its rivals have. In addition to that, the gaming experience also seems to be inferior. Besides, Android TV may perhaps not be suitable for you if you are not a big fan of media content from Google’s movies & TV library.

The Nexus Player by Google is a pretty decent movie and music streamer. But then again, it was not a definite success. In fact, it could only actually be good if you were to pair it with an Android tablet or phone with the intention of streaming a much wider variety of media content.

But even if Google has stopped the production of the Nexus Player, there is no doubt that it also had its share of the features of what could be a promising tech device.

But still, it’s game over for Google’s Nexus Player.